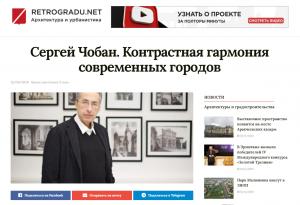 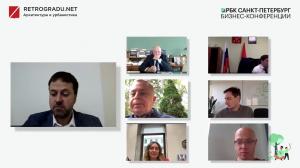 Our role is to create a comfortable, effective, and useful tool for foreign architects to present their skills to Saint Petersburg market”
— Stanislav Bakanov, speaker of Retrogradu.Net

SAINT PETERSBURG, SAINT PETERSBURG, RUSSIA, November 23, 2021 /EINPresswire.com/ — St. Petersburg In Search for International Architects
New St. Petersburg (Russia) media platform for international architects is celebrating the 20th event.
Russia was always an appealing yet challenging marketplace for foreign architectural firms to enter. Saint-Petersburg is famous for being one of the most complicated architectural environments in Europe. Protection of UNESCO Heritage objects, strict legislation, and protests from citizens are all playing their parts. However, this constantly developing city attracts the most successful and wealthiest of St. Petersburg’s companies. Especially now that the Supreme Court, Gazprom, Sberbank, and United Shipbuilding Corporation are moving their head offices there. Besides, what can be better than to be listed next to Rastrelli, Trezzini, Leblon, Monferrand, and other greatest architects of the past!

New St. Petersburg (Russia) media platform for the entrance to St. Petersburg is celebrating the 20th roundtable! The subject this time is Will Public Spaces Change the City? The participants are from DOM.RF, an integrated housing development institution, established by a decree of the Russian Federation's Government, Saint Petersburg Developers, Architects from St. Petersburg, Moscow, and London (Ali Mangera, Mangera Yvars Architects). The discussion will start at 11.00 Moscow time (Russian only) https://youtu.be/AM79egUmQ2A , and will be available on the official YouTube channel later.

It’s so great to see the influence that our project has on a new culture of dialog about the future of St. Petersburg. The old city is untouchable, but New St. Pete demands new thinking, new passion. Younger generations demand comfort, cities compete for residents, new time dictates new rules. St. Petersburg has a great past, our task is to give it a great future! And our role is to create a comfortable, effective, and useful tool for foreign architects to present their skills to the city – shares Stanislav Bakanov, speaker of the project.

New architectural media headliner Retrogradu.Net holds regular discussions and round tables about new architecture inviting those whose who matter in St. Petersburg. Officials, trendsetters, influencers, and media participate in professional discussions, share their views on the subject and evaluate architectural and urban projects in a respectful atmosphere. Follow-up publications in main business media, partnership with Russian Guild of Property Managers and Developers, and ability to provide necessary information on time make the result of events held by Retrogradu.Net predictable and effective.
Discussion themes include trends and tendencies, new projects, visions, regalements, and many other issues of the city planning agenda.
Themes of previous discussions:
• XXI Century – Signature projects of the city
• Petersburg XXI: who determines the quality of architecture
• The architecture of St. Petersburg: Who decides?
• Petersburg’s dilemma: What and how to preserve
• Petersburg 2050: Architectural future of the city

Videos from events are available on Retrogradu.Net and Youtube: https://www.youtube.com/channel/UC4tolobx07TtW5xDsyNQgXw (Russian only)
Participants of past events:
• Vladimir Grigoriev, the Chief architect of the city,
• Fadi Jabri, Nikken Sekkei,
• Sergey Tchoban, Tchoban Voss Architekten and architectural firm SPEECH,
• Nikita Yavein, Architectural firm «Studio 44»,
• Sergey Makarov , the Head of the Committee for the state preservation of historical and cultural monuments,
• Oleg Romanov, the President of the Union of Petersburg Architects,
• Andrey Yermakov, the Head of the Office of the Ministry of Culture of Russian Federation for the North-West federal district,
• Eugene Asse, Architectural school MARCH,
• And many others.
Discussions led to more than 200 publications in the leading Russian media reaching more than 10 million people.
Retrogradu.Net gives a great opportunity to enter the market of St. Petersburg for architectural firms from all over the world.

Stanislav Bakanov
Retrogradu.Net by SVOBODA Group
+7 921 932-22-35
email us here
Visit us on social media:
Facebook
Other