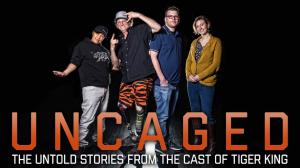 LOS ANGELES, CA, US, November 18, 2021 /EINPresswire.com/ — Featuring cast members from Netflix’s most-talked about TV series “Tiger King”, which is headed into Season 2 on Netflix this month, USA Entertainment presents UNCAGED: THE UNTOLD STORIES FROM THE CAST OF TIGER KING. This live tour will feature four cast members who starred in the blockbuster hit series: John Reinke, Joshua Dial, Saff, and Barbara Fisher – together on-stage for an engaging tell-all. Tickets for the tour are on-sale now.

Four members from “Tiger King” will engage in a lively moderated conversation, giving audiences an exclusive peek-behind-the-curtain of the bizarre and addictive TV series, which just launched Season 2 on Netflix. While with the streaming network announces the new season “promises just as much mayhem and madness as Season 1!”, the UNCAGED stage show features a 70-minute discussion with the cast members discussing all things “Tiger King” including exclusive videos, photos, and no-holds-barred stories – stories that will make audiences gasp in disbelief, and relive the series all over again.  Audiences will hear stories about Joe Exotic, Carole Baskin, Doc Antle and all the others; stories direct from the people who lived the mayhem.  The show will moderated by comedian and podcast veteran Todd McComas, and will also include a 20-minute live audience Q & A.

For tickets and VIP packages for the multi-city tour in the US and Canada, or for more information, please visit www.uncagedtigerking.com

** UNCAGED shows originally scheduled for 2021 were rescheduled to allow further response to COVID-19. All previously purchased tickets will be valid at the new date. Refunds will be issued at the place of purchase.

About the UNCAGED Cast:

John Reinke: After Texas native John Reinke had both legs amputated below the knee due to complications resulting from a horrible zip line accident, he became the manager of G.W. Zoo and long time friend of Joe Exotic. John appeared in 7 episodes of Tiger King and it was apparent, to everyone who watched, that he was the glue that held G.W. Zoo together.

Saff: After 6 years in the U.S. Army, Saff was able to fulfill his life-long passion for big cats by working for Joe Exotic’s G.W. Zoo for the next 8 years. An experience that landed him a role in nearly every episode of Tiger King and resulted in the amputation of his left hand.

Josh Dial: With a passion for politics and a huge heart Josh took on his dream job. Unfortunately he soon realized it was a nightmare he couldn’t wake up from.  The tenacity in which he possessed to keep Joe Exotic on the path for the Governor's office in Oklahoma was nothing short of impossible. Can you Imagine the stress of running that campaign? Josh can, and he will explain it all with stories you have to hear to believe.

Barbara Fisher: At the age of 19, Barbara Fisher chased her passion for big cats by going to work as a ‘full-time volunteer” for Doc Antle. From her own account, a topsy-turvy ride that lasted 8 years before ultimately deciding she needed to leave.

Moderator Todd McComas: Todd McComas is a standup comedian and retired police detective. He's a former cast member of Barstool Sports and The Pat McAfee Show and now hosts the true-crime podcast 10-41 with Todd McComas and co-hosts the 4 Life Podcast and FUNTOWN. Todd also directed and starred in the documentary Defending The Kingdom: A Conversation with Tim Stark and is a regular guest on The Bob & Tom Show.