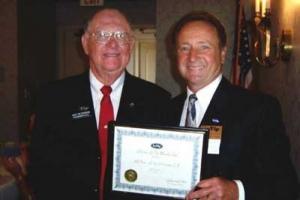 LeTip is just like family, there’s so much enthusiasm and everybody’s happy to help each other out.”
— Ken Peterson

MESA, ARIZONA, UNITED STATES, November 18, 2021 /EINPresswire.com/ — The founder of LeTip International, Inc., the world’s largest privately-owned professional business referral networking organization, Ken Peterson died in San Diego, CA on September 20, 2021, survived by his son and two daughters. Peterson will be remembered for the innovations and large contributions he made to the professional business networking world and for changing the lives of countless small business owners and entrepreneurs worldwide.

Ken Peterson founded LeTip, then called Tipsters, in 1978 after an accomplished career as an insurance executive. At the time, there were no formal business networking groups, but after attending a three-day insurance seminar in Texas, Peterson had the idea of developing a nationwide business leads networking organization.
“What inspired me to start LeTip was during my career in the insurance industry, I got together a group my friends and each one invited a guest, and each meeting we’d exchange business leads. After that, it just grew and grew. LeTip is just like family, there’s so much enthusiasm and everybody’s happy to help each other out.” Said Peterson at a membership drive event in La Jolla in 2016.

In the first 10 years of LeTip, Peterson laid the foundation for a solid formal networking group model and expands the group to 15 chapters in Los Angeles and San Diego, CA. By 1988, Peterson launches LeTip nationwide, expanding the LeTip networking model from its beginnings in California to states across the country. Thousands of business owners and entrepreneurs credit their personal and professional success to LeTip’s networking format, which ensures a steady stream of business referrals, helps members improve public speaking skills and fosters lifelong relationships.

“Ken knew the LeTip model, which we still follow every week and every day, would impact thousands by encouraging like-minded local business leaders to form bonds that would ultimately generate millions of dollars’ worth of business leads through lifelong friendships and trust.” Said Kim Marie Branch-Pettid, the current owner and President of LeTip and mentee of Peterson.

In 1998, Peterson codified his approach to business networking publishing the book “Dollars in Your Pocket: Group Networking Tips That Turn Into Sales.” In 2008, Peterson sold LeTip to his mentee and LeTip’s President Kim Marie Branch-Pettid. Today, LeTip is the world’s largest, most-respected business-to-business referral organization.
“Ken will be remembered as a genuine innovator, changing the lives and fortunes of thousands of LeTip members.” Said Branch-Pettid. “I will miss him sorely. He was an extraordinary speaker and visionary who saw LeTip as his second family. Ken has built a community of business leaders and entrepreneurs throughout the world that are loyal and hold each other to the highest standards.”
About LeTip International:

LeTip International, Inc., the world's largest privately-owned business leads organization, is a networking organization made up of members held to the highest caliber of professionalism and achievement, all of whom strive to do business with one another. Founded in 1978, LeTip has more than 250 chapters throughout the USA and Canada and is credited with hundreds of thousands of business referrals per year. Setting the standard for referral organizations, LeTip members are known throughout the B2B referral industry for their dedication to helping each other grow their businesses. Join a chapter or start your own at letip.com.
###