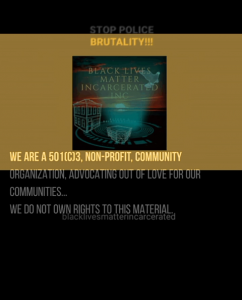 LAGUNA BEACH, CA, UNITED STATES, November 5, 2021 /EINPresswire.com/ — On February 1st, 2022, Black Lives Matter Incarcerated Inc will release their long awaited offender and ex offender reform every integration package for America's criminal justice system to every state department of corrections headquarters. The STOP 101 program has been instituted as a reform tool while preparing an offender for reintegration.

The Offender Resolution Program is instituted and intended prevent, and minimize the increased risk of violence that has proliferated throughout America's penal systems, and as an incentive for the offenders efforts of Reform, cooperation, and participation, they will have proposed a meritorious conduct system to each state intended to cut back on the cost of Incarceration throughout America. They have also constructed the walls of silence that the individuals there will be randomly reviewed for legal representation 2 times a year. A combination of these events, as they Black Lives Matter Incarcerated Inc said is "a direct assault on the increase in recidivism and crime".

Their program will save the tax payers money for the cost of unnecessary, disproportionate, and costly incarceration. It will also assist the states with their employment crisis. Stay tuned in. Black Lives Matter Incarcerated Inc is a 501c3 non profit community organization for the people and every race of people incarcerated with no voice, we are not associated with the BLM organization as a company.