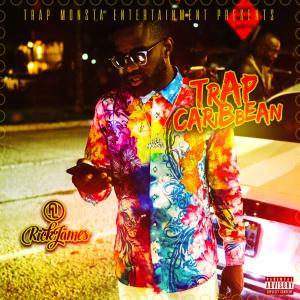 LOS ANGELES, CA, UNITED STATES, November 5, 2021 /EINPresswire.com/ — (Los Angeles, CA) November 5, 2021 – Atlanta-based Hip-Hop newcomer and Montego Bay native Al Rickjames delivers his signature flavor of Dirty South production and song structure meets Island-inspired instrumentals on the debut studio album, ‘Trap Caribbean’, which is out today on major streaming/digital platforms. The Jamaican artist started his career in 2017 and has built up a reputation as a well-versed rapper, songwriter, and dancehall performer in the years that have followed.

‘Trap Caribbean’ is an innovative collection of songs that merges the trap music sound coming out of Atlanta with the Reggae/Dancehall of Montego Bay. When approaching the writing and recording for his debut album, Al Rickjames sought to explore uncharted territory, ultimately resulting in a unique listening experience that speaks to a wide range of audiences, while offering something exciting and accessible. The new album features production credits from Grammy and Platinum recognized artists, including Cassius Jay, Cartier Fly, Dre Krazy, and more.

Influenced by the communities, cultures, and sounds of his two hometowns, there is an intriguing and incomparable authenticity to the music heard on ‘Trap Caribbean’, which showcases a candid and distinctly suave performer who has been well seasoned in his own personal melting pot. From the punchy, easy-breezy vibes of songs like “Anything You Want” and “Senorita” to the cold bars and ground-rattling bass of “Jubee Kane” and “Jamaica”, ‘Trap Caribbean’ feels like a cool drink of water (or a straight shot, no chaser) in the new wave of hip-hop.