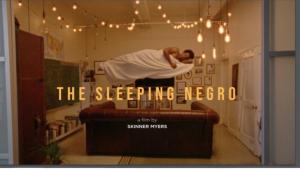 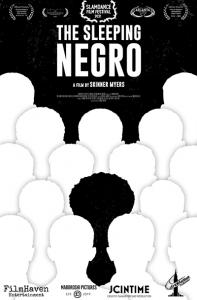 Skinner Myers effectively presents the issues so that the collective, global "we" must stop, ask questions, and wrestle with a very complicated problem.”
— Alan Ng, Film Threat

The Sleeping Negro had its world premiere at Slamdance 2021. It is currently screening in festivals in the USA and around the world. It will start its US theatrical run on Dec. 3 at Cinema Village in New York, the Glendale Cinema in LA and the Plaza Cinema in Atlanta, before getting a wider theatrical release and a digital and home-video release.

The Sleeping Negro opens with James Baldwin’s quote “To be a Negro in this country and to be relatively conscious is to be in rage almost all the time.” It tells the story of a young Black man, simply identified as “Man,” who must resolve the personal meaning of his blackness when his white boss orders him to commit fraud to benefit the corporation. Struggling with an overwhelming sense of shame for going through with the illegal demand, Man seeks consolation by discussing his unease with a black former friend and his white fiancé. This does not go well.

“Following in the footsteps of the LA Rebellion filmmakers, Skinner Myers tells a very personal and intimate story in a radically non-traditional cinematic style as a means to express freely his feelings as a Black man in America.” says Dr. Reinaldo B. Spech, Principal at ArtMattan Films. He continues: “We are delighted to get behind this amazing independent production and all that it represents. It is completely in line with our own vision as independent film distributors spotlighting the human experience of people of color all over the world. This film is unapologetic, powerful and, in my view, a meaningful and relevant film about the African-American experience that should be seen by everyone.”

"A superb character study of a black man, how he sees himself and how he was treated by society, it is surreal yet real and terrifying." ~ Ulkar Alakbarova, moviemovesme.com

“Skinner Myers effectively presents the issues so that the collective, global "we" must stop, ask questions, and wrestle with a very complicated problem.” ~ Alan Ng, Film Threat

"Remaining asleep to Myers as an African-American is a sin, but so is to be completely awake to the point where love for the self is all but embraced. In this impassioned, vigorous, lucid cinematic journey, the bleak, bruised-yet-fighting spirit of one Kendrick Lamar’s and every other prominent African artist strikes like lightning, and resonates like thunder." ~ LOUIE BAHAROM, cinephiliaph.wordpress.com

SKINNER MYERS is an award-winning filmmaker based out of Los Angeles. He has written and directed 11 films, including 'La Tierra del Exodo', 'Nightmares by the Sea', 'Things of Beauty Burn' and 'Frank Embree', which took home the Grand Jury Award at Hollyshorts. 'The Sleeping Negro' is his first feature film. Myers has studied at Columbia, Brooklyn College, the USC School of Cinematic Arts and is currently pursuing a Ph.D. from the University of Amsterdam.

FOR FURTHER INFORMATION AND SCREENERS, PLEASE CONTACT:
Diarah N’Daw-Spech, ArtMattan Films – Tel (212) 864-1760, e-mail: Info@africanfilm.com
ABOUT ARTMATTAN FILMS
ArtMattan Films celebrates in 2021 twenty nine years of exposing US audiences to a large variety of films about the human experience of people of color in many parts of the world. Films released by ArtMattan Films include Kirikou and the Sorceress, The Tracker, Gospel Hill, The Pirogue, White Lies, The Citizen, The Man Who Mends Women about the work in DRC of Nobel Peace Prize winner Dr. Dennis Mukwege, Mama Africa: Miriam Makeba about the world famous South African singer and more recently The Last Tree, Made in Bangladesh, and Marighella. More info at www.AfricanFilm.com