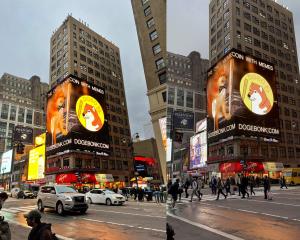 NEW YORK, USA, November 4, 2021 /EINPresswire.com/ — Cryptocurrencies have become an important fact of life. From its beginnings, in the global phenomenon known as Bitcoin, an almost endless number of Altcoins have arisen. This includes the wildly popular Shiba Inu Coin (SHIB) which recently made numerous headlines around the world. Shiba Inu is a meme coin, which based on its own creators intent, should not be taken too seriously. The price explosion that the currency has seen, however, means the meme coin has become a serious investment option to those initiated into the world of crypto currency trading.

Enter the latest trending meme coin DogeBonk token (DOBO), which looks to be developing in a similar manner as that of Shiba Inu and Doge Coin before it. The ambitious project has already achieved a market capitalization of more than $46 million dollars since November 1st, 2021 and is growing rapidly every minute. DogeBonk’s price has more than tripled since its creation and the profit potential in this meme coin seems to be still in its early stages.

The attention the DogeBonk Community has garnered, may prove vital for the meme coin, whose project has gained popularity through its media presence, including a billboard taken out in Times Square, New York City as well as its efforts in a wide range of social media networks. DogeBonk holders have grown to include more then 16,000 investors, including the well-known rapper Flyysoulja. The rapper explains that he sees DogeBonk as a solid long term investment and does not plan to sell his tokens any time soon.

Investing in rising cryptos has proven to be extremely lucrative, for those early enough to get in, as witnessed with Shiba Inu. SHIB saw a dramatic price increase of over 70,000,000% since its initial creation. To learn more and take a closer look at DogeBonk visit the project's website at www.DogeBonk.com.