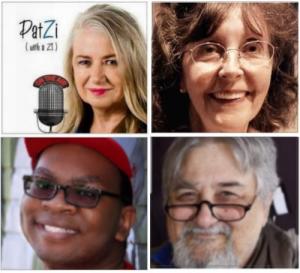 “Joy On Paper” (www.radio-joyonpaper.com) is a nationally syndicated radio show broadcast live from WTAN 1340-AM (www.tantalk1340.com) on Tuesdays and Thursdays at 11 a.m. (Eastern Time)

As she gears up for her 7th anniversary, “America’s Book Lover" Patzi Gil has added 3 new special correspondents to her website at https://radio-joyonpaper.com.

It’s my joy to talk every week to amazing writers—from best-selling New York Times authors to those who’ve just released their first book. For me it’s always fun to hear about their passion to write.”
— Patzi Gil

Joy On Paper” is broadcast live and online from the Clearwater-based WTAN 1340-AM (www.tantalk1340.com) on Tuesdays and Thursdays, 11 a.m.-Noon, Eastern Time.

“It’s my joy to talk every week to amazing writers—from best-selling New York Times authors to those who’ve just released their first book,” the host said. “For me it’s always fun to hear about their passion to write…”

Patzi describes as her show as “a program for writers and those who dream of writing.” All three of her new contributors are published authors who have appeared as “Joy on Paper” guests; each focuses on a different aspect of the book publishing industry.

“What makes Joy on Paper special is that we promote an author’s book long after their release date,” Patzi said. “Even the most famous authors have a short window of opportunity to promote their books. Release dates come and go quickly—and a publicity campaign lasts only a few weeks. During that time an author might be invited to do interviews on the Internet and syndicated radio programs or—rarely—television. After that they are old news.”

Patzi wanted to expand the window of opportunity for authors by finding a way to extend the shelf-life of their books: “It occurred to me that I could continue promoting my favorite authors by creating free 2-minute promos to remind my listeners of the books that they should not miss.”

And thus the first BookBuzz was born, featuring Rita Moreau.

“Since then Rita Moreau, the author of the ‘Ghost and Kooky’ mystery series, has recorded 60 BookBuzz promos for mysteries and thrillers,” said Patzi. “I use them on Joy on Paper whenever I have an open few minutes on my radio program. I also use them on my webpage and social media.”

Moreau’s segment was a big hit with listeners and authors alike.

“Rita’s Book Buzzes were so successful that I invited Davon Miller, the talented author of the ‘Mr. Tickety-Tok’ series, to join Joy on Paper as a special correspondent to review books for children,” Patzi explained. “As a child Davon spent a great deal of time in the hospital – now as a young author himself, he devotes his time to promoting reading. For his work in the community, he was selected Sunshine Ambassador by the City of St. Pete. He was the perfect choice to do BookBuzzes for the books that children should not miss.”

Davon started in January in the midst of the pandemic. So far he’s picked 10 talented authors, including Lesa Cline Ransome and James E. Ransome.

The latest addition to Joy on Paper came about as an extension of the show’s tagline: “A program for writers and those who dream of writing.” Patzi was determined to help (and motivate) listeners who felt they had a story to tell.

“I’m very excited about the most recent addition with Jim Lamb’s Literary Gems. These are short recordings that focus on literary devices and terms that every writer should know. His folksy way—and great choice of examples—makes these LitGem recordings fun for listeners. It’s great to have him join Joy on Paper as we continue to promote authors and new writers.”

What’s next for “Joy on Paper”? The show’s host hinted that she’s making a list and checking it twice. What’s the list for? Something she’s calling “The Patzi,” an award she’ll be handing out to the best of the more than 10,000 plus books she’s read over the years.

When will “The Patzis” get handed out?

ABOUT: “Joy on Paper” is a nationally syndicated radio show based in Clearwater, Florida. It can be heard in the Tampa Bay area on WTAN (1340-AM and 106.1-FM) Tuesdays and Thursdays, 11 a.m.-Noon, Eastern Time and online on http://www.tantalk1340.com.

Sample of “Joy on Paper” interview.