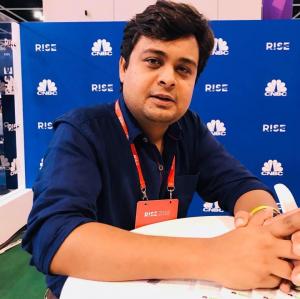 SILICON VALLEY, CALIFORNIA, US, October 14, 2021 /EINPresswire.com/ — Dandotia said things started to change for the Toch.ai when the Mumbai-based Video Analysis technology company turned its focus towards its people.

Recounting the initial phase of Toch.ai, Dandotia noted that startup was “not really a thing” and they, as aspiring entrepreneurs, haven’t researched enough before starting the business. He, however, opined that entrepreneurship is about being “crazy and innovative” and not about being “methodical and planned.” I was bullish on getting more deeper tech and build innovation and crazy stuffs and “Those are few things that I would argue have led to where we are today, and we are very very happy with ourselves on where stand today,” Dandotia said at the leadership platform.

Another experience that we noted is the technology challenge which changes very frequently and to go hand on hand with the technology trend you should have a committed team with learn and build and scale approach. “But going back to 5-6 years ago, I remember the first phase of our journey, it was not easy. It was the phase where we were just trying to build a business which has some meaning.

Talking about the next phase, Dandotia said things started to change for Toch when the Mumbai-based Video analysis technology company turned its focus towards its people. Dandotia, just focused on building technology team who remains committed and ready to adopt change which change in the technology and that plays a vital role in building Toch.ai and taking to where it is right now.

The 33 year-old IIM Indore and MIT alum stressed that creating an all-star and Big names team is not the only thing needed to expand a company or to create “something that is more generational.” Dandotia said that Toch.ai was able to instil a sense of family in its employees by putting faith in them and providing them greater autonomy. He emphasised the need to understand “why people come to work, what motivates human beings, what keeps them excited.”

“And we made some drastic changes in the way we understood people in the way we changed our values and brought out a completely redefined culture for ourselves because we realise that our only asset frankly is the people,” the entrepreneur added.

To build a Robust strategy the only thing will help down the line for a technology company is how your team is adopting a change with change in the technology being a technology startup.