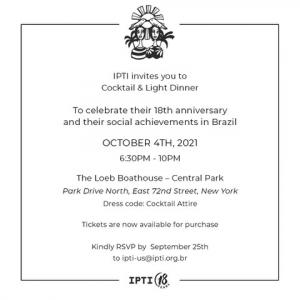 In celebration of its 18th anniversary, IPTI is hosting their sixth annual fundraiser and auction on October 4th, 2021, 6:30pm at The Loeb Boathouse in NYC.

In celebration of its 18th anniversary, IPTI is hosting their sixth annual fundraiser and auction on October 4th, 2021, 6:30pm at The Loeb Boathouse in Central Park, Manhattan. Everyone is invited to celebrate the social impact IPTI has generated in Brazil at this sixth edition of the annual event in New York. It will be a time to recognize IPTI’s partners, supporters, donors and each person who joined the organization in its efforts to overcome poverty in Brazil’s rural communities. Tickets are available for purchase here.

IPTI is a leader in social innovation for education in Brazil, with the goal of promoting sustainable socio-economic development through the application of cutting-edge technology and a design thinking process to identify and resolve educational gaps blocking social transformation within the most vulnerable communities.

IPTI began its work of supporting the development of communities in October 2003 in São Paulo, Brazil. In 2009, the organization decided to relocate its headquarters to Santa Luzia do Itanhy, in the state of Sergipe, a municipality with one of the lowest Human Development Indices (HDI) in Brazil, where 65% of its residents live in rural villages and 58% of the population receive government financial assistance. The organization works with local communities to generate solutions that are effective in highly vulnerable environments and have potential to scale. In essence, they look to reapply the effective strategies implemented in Santa Luzia do Itanhy to all communities in need of breaking the cycle of poverty.

IPTI has positively impacted over 133,000 people through its concerted efforts, including 32,985 students at 198 schools, in 8 states and 40 municipalities. These accomplishments have been recognized through receiving awards for their innovation and importance to society, including the 2016 Von Martius Sustainability Award and Banco do Brazil Social Technology Foundation award in 2019.