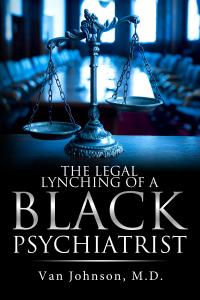 The Legal Lynching of a Black Psychiatrist

MISSOURI, UNITED STATES, September 20, 2021 /EINPresswire.com/ — In "The Legal Lynching of a Black Psychiatrist" Dr. Van Johnson recounts real life events, portraying a well-planned conspiracy to turn a young black psychiatrist into a fall guy. This is his story of being wrongfully accused and falling victim to a discriminatory system, and how he sought justice to right the wrong he experienced.

Over the years, Johnson has often been asked: “How did a young doctor living in an exclusive area, minding his business at home on a late Sunday night, end up in prison?”

This story is his answer, his way to let the public know what he experienced. He outlines a sophisticated plot straight out of a Hitchcock movie to lure a black psychiatrist to open a practice in a small town in order to turn him into a fall guy for another psychiatrist there under FBI investigation. By sharing his story, Johnson shows readers how easy it is to remove black people from society by taking advantage of systemic racism and misusing the criminal justice system.

"The case proves that color in America trumps class and education in every aspect of life. What happened to me is a daily occurrence for thousands of black men and women adjudicated in the nationwide racist court system." Johnson says.

As Dr. Conrad Worrill stated in the Chicago Defender on August 1, 1990: “In my judgment, this appears to be a classic case of a Black man accidentally shooting a white man in a predominately white town. Then, all the white power forces in the town come together to ensure that revenge takes place regardless of the law or justice.”

While society has changed and progressed much since the 1990s, many of the issues remain and much work has to be done to address them. In an era of renewed discourse on civil rights, equality and the rise of the Black Lives Matter movement, Johnson tells his story to inform his readers of the reality of these inequalities and injustices and the real consequences of discrimination.

About the Author
Dr. Van Johnson is a Harvard fellow who graduated from Rush medical college. He completed his psychiatry residency at the Illinois State Psychiatric Institute in Chicago, Illinois. His Pentecostal conservative upbringing, coupled with a background in music, was the motivating factors in his choice to become a psychiatrist, as he loved medicine but wanted a lifestyle as well.