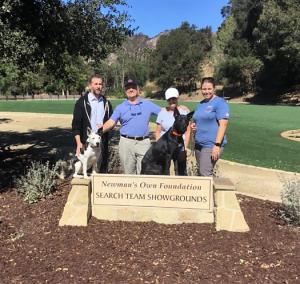 AVON, CT, UNITED STATES, September 20, 2021 /EINPresswire.com/ — When Paul Newman, the famous actor and founder of Newman's Own, asked his friend, Bob Forrester, to help him start and run the Newman's Own Foundation in the early 2000s, Bob was still the CEO of the successful consulting firm he founded in 1980. As friends, Paul Newman and Bob Forrester collaborated on numerous philanthropic projects. Paul had come to rely on Bob's vast experience in the global nonprofit sector and trust in Bob's judgment. Paul's widely admired instincts as a generous philanthropic entrepreneur and Bob's grounded in experience and commitment as a nonprofit leader were a perfect match, on top of the fact that they immensely enjoyed one another.

Standing out as an example of Paul Newman's philanthropic entrepreneurship and generosity was his unique commitment to contribute to charitable purposes 100% of any profits he earned from his food company, Newman's Own. This was not a complicated commitment in the early years as the profits were relatively modest. Still, lately, the company's annual profits were growing at a significant rate. It became a challenge for Paul Newman to contribute all the profits he earned in a single year with a reasonable level of confidence that his donations were making a meaningful impact. To help him solve this challenge, he turned to his friend. He asked him to design a theory of grant-making action that remained unprocreative while at the same time assuring the grants themselves were making a meaningful difference.

Not too long after Newman's Own Foundation, Bob Forrester's expertise was put to the test when Hurricane Katrina hit. "Paul Newman called me moments after the extent of the devastation of Katrina began to become known. He asked, 'How much money do we have to give to help with the Katrina mess? What should we do?' He wanted to do something and do it fast," recalled Bob Forrester. "It would be the first big test of how he and I were going to work together in this new relationship. My answer, we can round up about $1.2 million in cash, but let's not do anything yet. Let's wait, let the rush to help, the big media coverage and public outpouring recede, and then see what the needs are being missed. We can make the dollar commitment but hold our fire as to how it will be used. This was greeted with silence for a long pause, then Paul came back with a simple, 'You're right, let's be there to help when all the attention has passed.'"

The Newman's Own Foundation did just that. As we all know, in the long aftermath of Hurricane Katrina, the real human needs, the suffering, and the dislocations emerged for which there was so little in the way of resources, and the Foundation took action.

"When the enormity of the devastation of Katrina began to become clear, and just how much human needs would be unmet, I recommended to Paul that we identify organizations which were integral parts of their community and provide a significant grant to them,” Bob Forrester explained. “Of the $2 million, we donated $200,000 to special children's charities and distributed the remaining balance of $1 million among five community foundations with the instructions that they use the funds to relieve the suffering and needs associated with Katrina using their own judgment and made a point of saying that could include faith-based organizations as long as they do not require any adherence or instruction in a particular belief associated with their use of these funds. We additionally permitted them to promote our grants if that would be helpful to them. Since Katrina, we continued to pay special attention to needs associated with Katrina."

From the Katrina experience, Bob Forrester went on to develop a special disaster response theory of action policy for Newman's Own Foundation, which included:

Disaster Response
– Not making large grants in the immediate aftermath of a disaster, but setting aside funds to respond to unmet needs once heightened publicity wanes and unmet needs emerge.
– Look to fund nonprofits that are integral parts of their communities. They were there before and during the disaster and will be there well into the future.
– Be generally nonprescriptive as to how the funds are to be used outside of a broad policy to assure they are 100% expended to meet unmet needs associated with the disaster and follow-up reports are delivered to the Foundation.
– Be prepared to use a full array of Newman's Own assets if needed and appropriate.