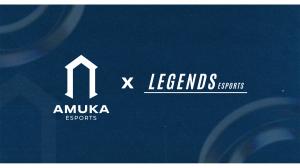 Andrew, Nathan and their entire community have proven that they are the premiere esports league for League of Legends and Valorant and their growth has been off the charts”
— Ben Feferman, CEO of Amuka Esports

TORONTO, ON, CANADA, September 20, 2021 /EINPresswire.com/ — Amuka Esports has signed a definitive agreement with Legends Esports to fully acquire the company. Legends Esports, based in Waterloo, ON, has built one of the largest amateur leagues for game titles such as League of Legends and Valorant that includes 7 competitive divisions and over 1,500 total players.

“Andrew, Nathan and their entire community have proven that they are the premiere esports league for League of Legends and Valorant and their growth has been off the charts. We are excited to continue to build on that momentum and expand into new game titles,”
according to Ben Feferman, CEO of Amuka Esports

“We are so proud of the growth we’ve been able to achieve over the past year and we are amped about the next chapter with the Amuka team. We have built an amazing community and we are just getting started,” according to Andrew Collard, CEO of Legends Esports.

Registration for the next split opens in December, but you can visit legendsesports.gg for more information on events, tournaments, and quality productions in the coming months.

About Amuka Esports
Amuka Esports is a diversified esports company focusing on teams, tournaments, content, and venues. We create localized hubs in cities across North America, each consisting of a venue, tournament organizer, content team, merchandise brands, and incubator. Amuka also operates Canada’s largest esports venue along with several teams based in North America and Europe. Learn more about our impact on the North American esports scene at our official website and on our Twitter, Instagram, and Facebook.

About Legends Esports
Legends Esports is a competitive gaming organization that strives to offer amateur players more unique, competitive environments to play their favorite online games. We aim to reduce the toxicity levels of mainstream multiplayer games, while providing pro-like aspects to the amateur scene through individual and team statistical analysis, live streams, and massive prize pools. We at Legends aim to help all individuals improve their macro and micro skills within the gaming scene. You can find more info at our official website, our Discord server, our Twitter, and our Twitch.