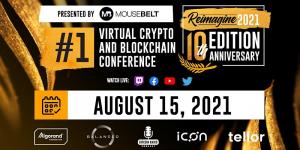 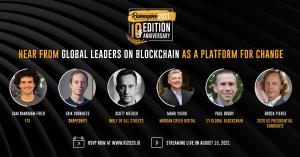 Join us to hear from some of the tops names in crypto! 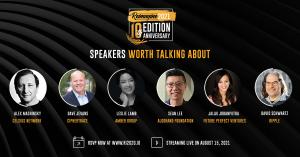 Speakers worth talking about!

The #1 virtual blockchain conference returns for its 10th anniversary edition, featuring 40+ of the biggest names in the space

We are beyond grateful to be able to bring the community this special 10th anniversary event… we hope to provide a space to celebrate and reflect all the wins we've had despite everything.”
— Ashlie Meredith, VP at MouseBelt

SAN FRANCISCO, CA, UNITED STATES, August 5, 2021 /EINPresswire.com/ — The world’s largest blockchain education event returns in August with our network of more than 100 universities and partners, featuring over 40 of the biggest names in cryptocurrency helping to educate and evangelize about blockchain. The pre-record conference is streamed fully without interruption from August 15 to 17 on Facebook, YouTube, Twitch and Dlive. Free tickets may be claimed here.

The MouseBelt Blockchain Accelerator hosts the REIMAGINE conference series, a monthly event featuring innovators and leaders from the cryptocurrency space. REIMAGINE was started as a response to the COVID-19 pandemic forcing all in-person conferences to stop worldwide. It has evolved into a continually free event, holding close to the “for all” attitude of blockchain and DeFi.

“We are beyond grateful to be able to bring the community this special 10th anniversary event," says Ashlie Meredith, Vice President at MouseBelt. "With all the ups and downs the crypto space has seen over the last year, we hope to provide a space to celebrate and reflect all the wins we've had despite everything.”

The highlight of each REIMAGINE conference are our speakers, who graciously agree to speak with hosts about a range of topics – this time including some audience questions as well! Some of the speakers coming to REIMAGINE are featured below!

Sam Bankman-Fried, an MIT graduate and former Wall Street ETF trader, will be speaking at REIMAGINE for the first time. He launched FTX in 2019.

Erik Voorhees, CEO of ShapeShift, is not new to REIMAGINE. The startup founder and entrepreneur with an unwavering dedication to the principles of freedom will make a second appearance at the conference after his last visit in 2020.

Scott Melker is an expert trader and investor, as well as the Wolf of All Streets. He has been trading for more than 20 years, using his knowledge to help others grow their portfolios.

Mark W. Yusko is an American investor, hedge fund manager, and philanthropist. The founder of Morgan Creek Capital Management will be making a sixth appearance at REIMAGINE.

Brock Pierce is a seasoned entrepreneur and venture capitalist with an extensive track record of founding, advising, and investing in disruptive businesses. He ran for U.S. president in 2020.

Apart from being the CEO of Celsius Network (a blockchain-enabled investment platform), Alex Mashinsky is also a serial founder of technology firms in the United States and a leader in developing advanced telecommunications technologies.

Dave Jevans used to write code for a living, and now he's the CEO of CipherTrace, which is a platform that develops cryptocurrency Anti-Money Laundering, cryptocurrency forensics, and blockchain threat intelligence solutions.

Leslie Lamb is a seasoned, savvy professional with over a decade of experience in finance and is the Head of Institutional Sales at Amber Group. She understands the intricacies of financial markets and how to build relationships with clients.

Sean Lee is a highly accomplished executive with extensive experience in both the start-up and global technology space. He has been CEO of Algorand Foundation since June 2018.

Paul Brody is a Global Blockchain Leader at EY. He advises clients on the strategic opportunities and implications of emerging technologies, including blockchain, artificial intelligence, and robotics.

Jalak Jobanputra is the founder and managing partner of Future Perfect Ventures, an early-stage funding company for blockchain and crypto-related businesses around the world.

A skilled and experienced cryptographer, David Schwartz has been the CTO at Ripple since 2013, developing XRP Ledger, one of the most innovative software projects in finance.

MouseBelt is an ecosystem promoting blockchain innovation by supporting hands-on development of the emerging projects and leaders in the industry. The leaders they support are:
1) Startups — MouseBelt accelerator supports early-stage companies with capital and in-kind investments;
2) Builders — MouseBelt Engineering supports developers and projects with open-source tools and a development shop; and
3) Community — its media and university projects encourage newcomers to get involved with blockchain.