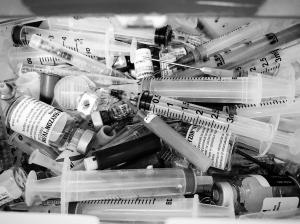 First-responders in Pinellas County saw a 34 percent increase in suspected overdose-related emergencies in 2020.

The pandemic caused a surge in overdose deaths in Pinellas County galvanizing Foundation for a Drug-Free World Florida to increase its education efforts.

We shouldn’t have to wait for there to be a drug epidemic in order to do something about it.”
— Julieta Santagostino, president Foundation for a Drug-Free World Florida

CLEARWATER, FL, UNITED STATES, August 5, 2021 /EINPresswire.com/ — According to the Pinellas County Opioid Task Force, first-responders in Pinellas County saw a 34 percent increase in suspected overdose-related emergencies in 2020. In total, first-responders were dispatched to 5,275 suspected overdoses. In light of these statistics, the Foundation for a Drug-Free World (FDFW) Florida chapter is increasing its ongoing education efforts through virtual seminars with scores of teachers. The virtual seminars empower teachers from Clearwater, Pinellas County, and other parts of Florida to educate the thousands of children they are responsible for on the facts and harmful effects of opioids.

“We shouldn’t have to wait for there to be a drug epidemic in order to do something about it,” said Julieta Santagostino, president of the FDFW Florida chapter. In the last year, FDFW Florida has reached 860,000 people through in-person and virtual events as well as social media. “With our virtual seminars kids are getting smarter about the harmful effects drugs have on a person,” said Santagostino. “We need to reinforce this education more than ever.”

FDFW provides a free kit for educators with everything they need to teach the class—from booklets for the kids, to classroom posters, visual aids and a guidebook full of lesson plans. In her 15 years of drug education Santagostino has, “seen young people who thought they knew it all because their parents were users or their older brothers and sisters were users. To the kids the users are ‘doing fine’ … Then they see the documentary and read the booklets. After that they take extra booklets home so they can get their family members the truth.”

A preliminary report by Project Opioid Tampa Bay in April 2021 showed that more than 1,200 Tampa Bay area residents died from opioid overdoses in 2020 compared to 1,024 overdoses the year before.

Before the pandemic, opioid use was showing signs of decreasing. According to a 2018 survey conducted by Sermo, a private social media network for doctors and physicians, some 69 percent of the doctors that responded said they reduced the number of opioid prescriptions they wrote or stopped prescribing opioids altogether in the last two years. The Center for Disease Control said drug overdose deaths in the U.S. fell slightly in 2018, declining by 5.1 percent from 2017.

The past decreases in drug abuse can be attributed to school-based education efforts, according to the Drug Policy Research Center, “school-based drug prevention is therefore a cost-effective tool for improving public health and for making incremental progress in the effort to manage mature drug epidemics.”

“Knowledge is power,” said Santagostino on that point, “and at the Foundation for a Drug-Free World, we are working hard every day to empower others with knowledge. Be it through our educational seminars that are delivered throughout the state or by handing out our Truth About Drugs booklets to thousands at community events, door-to-door, at parades and even sporting events.”

With FDFW’s educational tools, “We don’t have to let things fall into tragedy,” said Santagostino, who noted that something can be done to handle the current drug epidemic. “The truth about drugs is something that everyone should know and something that teachers need to talk about with their students.”

About Foundation for a Drug-Free World:

The Foundation for a Drug-Free World is a nonprofit public benefit corporation that empowers youth and adults with factual information about drugs so they can make informed decisions and live drug-free. Through a worldwide network of volunteers, 50 million drug prevention booklets have been distributed and tens of thousands of drug awareness events have been held in some 180 countries. The Church of Scientology is a sponsor of the foundation, making it possible for the foundation’s “Truth About Drugs” public service announcements to be aired on more than 500 television stations. Humanitarian L. Ron Hubbard said, “Drugs rob life of the sensations and joys which are the only reasons for living anyhow.”