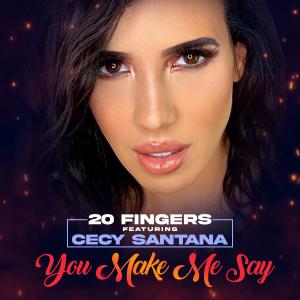 The songstress originally from Brazil, Cecy Santana, is set to excite her fans with her new song “You Make Me Say” available on all platforms.

LOS ANGELES, CA, UNITED STATES, July 30, 2021 /EINPresswire.com/ — Native Brazilian artist Cecy Santana’s new single and video titled "You Make Me Say" is available on all major platforms on July 30th. “You Make Me Say” is a sultry track produced by the legendary 20 Fingers on DMN Records and the fun and sexy video is sure to elevate the song's lyrics and melody. Listeners will be compelled to give their full attention and sing along.

Known for her versatile style in the music industry, Cecy Santana mixes the sultry sounds of jazz, samba, funk, rock ’n roll, and pop to create her one of a kind sound. She has performed countless sold-out shows and has a devoted and increasing fan base.

Previous work includes original music featured in commercials and music conventions and appearances with Musiq Soulchild, Lil Wayne, Fantasia Barrio, Roy Ayers, and Hugo Ferreira from Tantic Rock band. In addition to her music career, Santana is poised to become the next force in music, theatre, art, and motion picture and will star in a short film called “The Understudy'' set for release in 2021.

“You Make Me Say” is available on all major platforms.

Cecy Santana hails from Sao Paulo, Brazil. As a product of a large musical family, she learned and embraced music from her legendary father Carlos Santana. Santana is endlessly reinventing herself, and has been featured in commercials and conventions. As a highly acclaimed composer, Cecy’s original music, whether with one of her many Brazilian ensembles or solo, will command your attention.