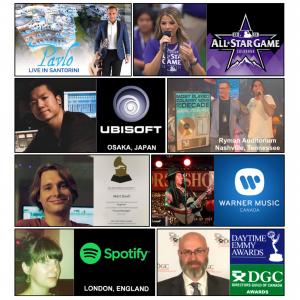 Paul (Pavlo) Simtikidis will film his 3rd PBS Special in Santorini, Greece on August 6th and 7th. The special will air across North America in December as he continues to tour around the world. In Nashville, Terry Sawchuk was awarded the ‘MOST PLAYED COUNTRY SONG of the DECADE’ plaque for ‘Barefoot Blue Jean Night’ at the renowned Ryman Auditorium.

After an internship at UBISOFT in Osaka, Japan arranged by Harris, Norio Koblizek-Kobayashi was hired as “Jr. Audio Designer”. He has now been promoted to “Associate Audio Designer”. Matt Snell was awarded a certificate from The Grammy’s as Engineer for Dua Lipa’s 2 X Platinum “Future Nostalgia’, which won The Grammy in Los Angeles for ‘Best Pop Vocal Album’.

In Toronto, Julian Taylor re-signed with Warner Music Canada. Now a solo artist, his band ‘Staggered Crossing’ was signed by Warner 20 years ago. In 2021 he has been nominated for 2 JUNO Awards, Polaris Music Prize, Jim Beam Indies, Canadian Folk Music Award and Indigenous Music Award. He performed live for the first time in 2 years at The Horseshoe on Saturday, July 24th.