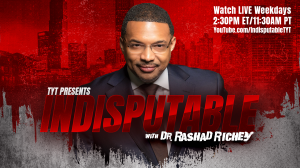 Distribution of the show will expand to linear platforms like Samsung TV Plus, YouTube TV, Pluto TV, Comcast Xfinity X1 and Flex, Roku, and Xumo

I’m grateful to the TYT team and audience for being so supportive as we work daily to bring high quality news content and authentic political analysis to the masses.”
— Dr. Rashad Richey

LOS ANGELES, CA, UNITED STATES, July 21, 2021 /EINPresswire.com/ — TYT (www.TYT.com) announced today the addition of Indisputable with Dr. Rashad Richey to its news and politics line up. The show launched on June 7th as a limited series. Since its launch, the channel has surpassed 145,000 subscribers on YouTube and has amassed 40 million views on YouTube and Facebook in the first 6 weeks of the test run. As part of TYT, ‘Indisputable’ will be available on digital platforms and linear TV: YouTube, Facebook, Twitch, Twitter, YouTube TV, Roku, Pluto TV, Xumo, Comcast Xfinity X1 and Flex, and Samsung TV Plus.

“What I love about Rashad is his logic. Indisputable lives up to its name because his arguments are undefeated, whether he's taking on conservatives or dissecting an issue. His rationale is so unassailable, the other side feels instantly defeated. He is a joy to watch,” TYT founder and host of The Young Turks Cenk Uygur said

Since its launch Dr. Richey has interviewed prominent political figures such as US Senator Jon Ossoff on making Georgia the hub of sustainable energy, 2020 Presidential candidate Marianne Wiliamson on gun control, and rapper and activist Killer Mike on Juneteenth and supporting Black businesses.

Dr. Rashad Richey said about the announcement, “I’m grateful to the TYT team and audience for being so supportive as we work daily to bring high quality news content and authentic political analysis to the masses. Cenk Uygur created something really special with TYT Network. They truly honor substance, society and humanity. I am thrilled to have this seat in the lineup and will endeavor daily to bring audiences across America and beyond the absolute best political news show we can.”

On 'Indisputable,' Dr. Richey provides insightful commentary on the top news stories of the day with a TYT guest host or contributor and debates conservative-leaning guests. One of the most popular segments is ‘I Wish a Karen Would,’ during which Dr. Richey exposes people caught on camera weaponizing their privilege, and then breaks down the dangerous consequences of their actions. The addition of Indisputable with Dr. Rashad Richey on TYT marks a year of expansion for the network as it aims to bring on new voices with a shared interest in driving positive change by delivering authentic political and news commentary.

TYT’s Head of Programming Judith Benezra shared, “Nobody brings the facts and the fire quite like Dr. Rashad Richey! With his authentic, sharp and forthright commentary 'Indisputable with Dr. Rashad Richey’ has quickly emerged to be a TYT audience favorite, and we are absolutely thrilled to enrich our programming slate with its pick up.”

————–
ABOUT TYT
TYT is America's largest online progressive news network and the #1 most engaged news and politics network. The award-winning network is one of the top multi-platform online content creators, generating over 500 million views a month.

Most recently TYT received the Audience Honor in the Shorty Awards for Best in Live Event Coverage for their coverage of the 2020 Election. The Damage Report with John Iadarola was a 2021 Webby Honoree for Social Media Presence.

Cenk Uygur was recognized by Mediaite on their list of Most Influential in News Media 2019. Host Ana Kasparian was named to the 2016 Forbes 30 Under 30 Media List and The Daily Dot’s 20 Women of YouTube list. The Young Turks won the Audience Honor for Overall YouTube Presence in the 2018 Shorty Awards and the Webby People’s Voice Award for News and Politics – Series. Over the years, TYT has been recognized by the Streamys, Webbys, and Shorty Awards. The Young Turks was awarded the Imagen Vision Award and the Vote It Loud Fifth Estate: Champion in Media Award for Best in New Media in 2016. In 2015, The Young Turks was named to Variety’s FameChangers List (No. 7) and The Hollywood Reporter’s Next Gen List (No. 1 in the News category).

TYT includes owned and operated and partner shows such as The Young Turks, The Damage Report, TYT Investigates, Happy Half Hour, TYT Sports, Indisputable with Dr. Rashad Richey and more.

ABOUT Dr. Rashad Richey
Dr. Rashad Richey is university professor, lecturer, broadcaster, political analyst and conveyer of facts. His intelligent and opinionated delivery style led him to being voted “Best Talk Radio Personality in Atlanta” by readers of the Atlanta Journal-Constitution for his weekly morning program, The Rashad Richey Morning Show, on News & Talk 1380-WAOK (7am-10am) and named “Most Trusted Voice in Atlanta Radio” by readers of the Atlanta Business Journal. Rashad, a Political Analyst for CBS News Atlanta, was also nominated for an Emmy Award in 2019 for his riveting television news coverage of a small Georgia town still dealing with the very real effects of racism and systemic segregation.

Rashad strives daily to utilize his platforms to leverage equity for others. He is a proud member of the American Association of University Professors, National Association of Black Journalists (NABJ), Atlanta NAACP, Atlanta Press Club as well as other civic organizations.