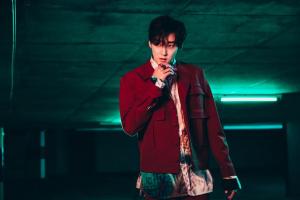 “Got It” single art – Photo by Chase Stockman

“Got It” crosses a sound mixed between K-Pop, Pop, R&B & Retro that boasts Kevin’s sexiness & versatility. The single was released worldwide on June 30.

LOS ANGELES, CALIFORNIA, UNITED STATES, July 20, 2021 /EINPresswire.com/ — Kevin Woo has released his US debut single “Got It’, collaborating with top producer Shintaro Yasuda (Ariana Grande’s “Off the Table” featuring The Weeknd), on all streaming platforms worldwide on June 30th.

“Got It” marks the beginning of Kevin’s journey as a crossover K-Pop artist, with a mature and sexy sound, a shift and progression from the soloist’s former styles. The sultry yet powerful song is inspired by the genres of Retro, R&B, and K-Pop beats. It is a medium-tempo song that is a balance anchored between a dark and feel-good vibe. Sonically, the producer Shintaro chose darker sounds and instruments inspired by 80s analog synthesizers. As the song opens, the drums drive a groovy and uplifting chorus that inspires people to dance and feel good. The mood is envisioning summer nights with the transition from dusk to dawn over time.

Kevin states, “While writing ’Got It’, I thought about how this song expresses my honest feelings of being in a toxic relationship and having a hard time leaving something that ultimately made me feel good. This song also correlates with my professional and personal life because although it is hard to constantly be in the spotlight under pressure in the public eye, I choose to remain steadfast and continue to strive to be a great artist. At the end of the day, I genuinely love to sing and perform and that is ultimately what makes me feel alive.” He added, “This is the first song that I’ve written as an artist. To work with Shintaro, who has worked with household names like Ariana Grande and The Weeknd, was a huge inspiration for me.”

Shintaro says “Working with Kevin is such a great experience. Due to the pandemic, we initially met and started the song over Zoom, but finally was able to come together and work in person. We both shared the same vision for the song, and it is so nice that he knows where he wants to go creatively. Initially, we had long conversations about life, and I think we immediately bonded. The song came about naturally and unforced. I really wanted Kevin to be in the moment and really have fun working on the song and trusting his instinct. We are both perfectionists but still managed to have fun in the writing and recording process. By the time we were halfway done with the song, we already knew the visual direction we wanted to take the song and immediately discussed the music video. Kevin is so focused and driven it was such a blast writing this with him!”

Kevin added, “As an independent solo artist, I have full control over my creativity as an artist and project planning. It’s been a wild ride and a pretty steep learning curve, but it feels liberating to take matters into my own hands and grow as an artist.”

Building anticipation for Kevin’s first US debut track, “Got It” bolsters him as the first K-Pop soloist to produce NFT launches. KLKTN is launching its platform in July 2021 in conjunction with “Got It”, with Kevin as the Creative Director in Residence. This drop will feature original Special Editions and collectible Moments, inspired by the new single's music video.

KLKTN, a curated NFT platform that fans on a unique creative journey sets out to reshape the K-Pop, Anime, and J-Culture. In collaboration with top musicians and artists and powered by blockchain technology, KLKTN is taking artist-fan engagement and the best of music’s experiential culture into the digital world. These behind-the-scenes content can be found exclusively on KLKTN, and fans can show their support and appreciation by purchasing these moments as NFTs. In addition to purchasing artist-licensed NFTs, fans can access different types of content and once-in-a-lifetime perks based on their fan club membership tiers. KLKTN builds on top of Flow blockchain to achieve affordable and environmentally sustainable minting – leaving more for artists, fans, and the planet.

Kevin Woo is a K-Pop veteran who has paved the way for foreign members in K-Pop groups and has proliferated K-Pop in its early stages starting as early as 2006. Kevin was the former main vocalist for the K-Pop boyband U-Kiss. He has led world tours, charted on global charts, and amassed a loyal following of KLOVERs (his fan club) in all corners of the globe. Known for his unique and charismatic honey-like voice, Kevin ventures into new chapters as a soloist and actor and strives to help bridge the East and the West.

“Got it” is OUT NOW on Spotify, Apple Music, and other music platforms around the world. The music video can be viewed on Kevin’s official YouTube Channel.

Play Kevin Woo’s ‘Got It’:
https://smek.lnk.to/KevinWoo_GotIt

KEVIN WOO ‘Got It’ Official MV