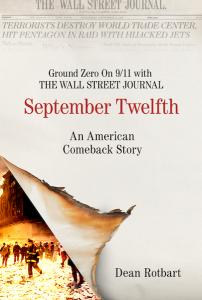 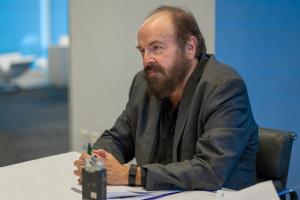 The way the Journal and its staff responded on 9/11 offers lessons for any organization, business or individual who is confronted with an unexpected, significant setback and can either rebound or quit”
— Dean Rotbart, Author

The book, which critics are hailing as “a story that had to be told,” is available for $34.95 in softcover and $42.95 in hardcover from TJFR Press. Prices include tax and shipping.

Readers who order the book in advance will receive a signed, first-edition copy of September Twelfth at no additional cost.

“September Twelfth” is scheduled to ship on August 20th, ahead of the 20th anniversary of the 9/11 terrorist attacks.

On September 11, 2001, The Wall Street Journal's main newsroom, located just across the street from the World Trade Center, was obliterated by falling debris and flaming smoke.

Rotbart’s book is the true story of how the traumatized men and women of the Journal and Dow Jones – journalists, graphic designers, technicians, administrative assistants, compositors, and delivery truck drivers – overcame their personal anguish and confusion to publish a Pulitzer Prize-winning edition on September 12th.

“The heroic story of how the world's most important newspaper, The Wall Street Journal, handled 9/11 has not been told until now. This riveting account shows how that incredible day reflects the American spirit. September Twelfth is not to be missed.”

“Dean Rotbart makes a compelling case about the ability of Americans to act independently and collectively problem-solve.

That the staff of The Wall Street Journal overcame tremendous obstacles to publish the next day’s edition on time speaks volumes of a corporate culture and professional ethos and the vital contribution that the fourth estate brings to the viability of the grand American experiment.”

The Poynter Institute, a non-profit journalism school and research organization, calls “September Twelfth” the “most detailed and dramatic look yet at the [Wall Street Journal’s] Pulitzer-winning work following the terrorist attacks.”

Rotbart says he wrote “September Twelfth” because “I believe it reflects the indomitable spirit of America and Americans. The way the Journal and its staff responded on 9/11 offers lessons for any organization, business, or individual who is confronted with an unexpected, significant setback and can either rebound or quit.”

Rotbart, founding editor-in-chief of the newsletter, formerly worked as a reporter and columnist for The Wall Street Journal, which nominated him for a Pulitzer Prize in Explanatory Reporting. Along with his wife, Talya, he is the author of two previous books.

To arrange interviews or schedule media appearances with Rotbart, contact TJFR Press at media@september-twelfth.com or phone 303-296-1200.