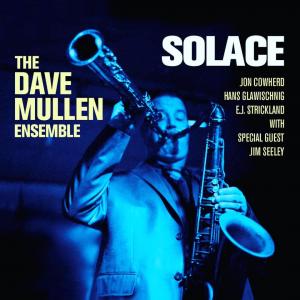 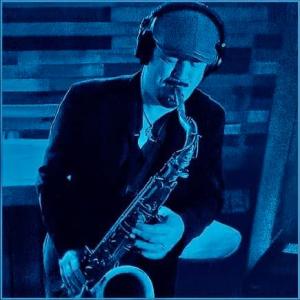 Saxophonist/composer Dave Mullen offers a welcome dose of Solace to a world sorely in need of it on his invigorating new album. Far from the somber elegy the title might imply, however, Mullen finds his comfort in the inspiring voices of some of jazz’s most iconic figures, in the warming embrace of family, and in the exhilarating musicianship of a group of his masterful peers: pianist Jon Cowherd, bassist Hans Glawischnig, drummer E.J. Strickland and, in a pair of special guest appearances, trumpeter Jim Seeley. The album was also mixed by the Grammy-winning producer engineer Jeff Jones, a regular collaborator with Jazz at Lincoln Center who has worked with the likes of Wynton Marsalis and Dr. John.

Due out July 16, 2021 via Mullen’s own Mullsoul Music imprint, Solace finds the multi-faceted saxman deviating from the eclecticism of his previous release, Mahoney’s Way. Featuring his band Butta, that album showcased the wide range of Mullen’s influences, from contemporary jazz to funk to R&B to gospel. His follow-up narrows the focus to a buoyant straightahead sound, absorbing that wealth of influences into the album’s vibrant sound rather than shifting from one style to the next.

Not that Mullen is any stranger to the straightahead jazz world. While his musical experiences have been wildly diverse over the course of his 20-plus year career, Mullen has always maintained an active, in-demand role as a sideman with some of the music’s leading names, a jaw-dropping roster that includes Roy Ayers, Vic Juris, Mark Egan, Marc Ribot, John Medeski, Claudio Roditi, Cecil Bridgewater, John Hicks, Delfeayo Marsalis and Robin Eubanks. That’s in addition to his work in a myriad of other genres, alongside the varied likes of Gloria Gaynor, Nile Rodgers, P-Funk, Bernie Worrell, The Dirty Dozen Brass Band, and Gil Scott Heron.

“My last album was designed to encompass everything I do on a regular basis,” Mullen explains, “from jazz to rock to funk to gospel and everything in between. Music is music to me. But this time I wanted to do a more focused project. I guess it's somewhat of a departure being strictly straightahead, but it's not a departure considering the artists I've been working with for the past 20 years.”

That tireless career journey was captured by the album’s intended title, The Grind, which it was to share with its McCoy Tyner-inspired opening track. A few events in the aftermath of the recording date changed the tone of the session in Mullen’s mind, however. The first, everyone is intimately familiar with: a global pandemic struck, reminding suddenly deprived listeners worldwide of the importance of music to their lives and the second being the death of his brother.

This staggering loss forced Mullen to step away from the album for a time. But when he was able to listen to the music again, he found the SOLACE – and thus the title – he was looking for. And with the music world devastated by the virus both physically and economically, he realized that these bracing sounds could provide the same service for countless others.

“Some of the musicians we've lost have played deeply intimate roles in our lives,” Mullen points out. “Through all this, the idea of The Grind lost its meaning, and in its place I wanted to offer some healing and love.”

To create that supportive mood, it helped to have such brilliant musicians in the band. The core quartet was specially convened for this date, though Mullen and Cowherd (Brian Blade, Cassandra Wilson) share a friendship dating back nearly 30 years. Another long-standing friendship with Glawischnig (Chick Corea, Ray Barretto) made him an obvious choice to hold down the bass chair. At the recommendation of Cowherd, Mullen then reached out to Strickland (Ravi Coltrane, Russell Malone), and the combination clicked. “When we came together and played, it just felt like magic,” Mullen recalls.

Seeley (Chico and Arturo O’Farrill), another old friend, was an integral addition on the album’s opening pair of tracks. The once title tune, “The Grind,” is an homage to McCoy Tyner, with an aptly forceful piano riff and an overall feel that evokes the classic Coltrane quartet. It’s followed by the funky “Shanna Shuffle,” which has a distinct Eddie Harris feel but is in fact dedicated to Mullen’s mother.

The lyrical “For Michael” pays tribute to Michael Brecker, one of Mullen’s primary influences, with a transportive melody essayed by tenor and bass in tandem. An up-tempo reimagining of “Satin Doll,” the album’s sole cover, views the immortal Duke Ellington classic through a post-bop lens, while “Kinda Green” takes a Coltrane-esque spin through a traditional Irish reel to give a tip o’ the hat to both the iconic saxophonist and Mullen’s Irish heritage.

John Coltrane also provides some of the inspiration for the angular “Mane Tronk,” in combination with his onetime boss, Thelonious Monk, whose eccentric approach to melody is a clear touchstone for the piece. The breezily grooving “Like Rahsaan” ends with a nod to Rahsaan Roland Kirk, whose influence pervades Mullen’s playing in several ways: most directly, the saxophone neck that Mullen plays once belonged to the late sax titan. Kirk’s penchant for playing multiple saxophones is also a key part of Mullen’s arsenal; on “Like Rahsaan” as well as “Satin Doll,” Mullen essays the melodies on tenor and soprano at once.

“We’ve all lived through a lot of loss,” Mullen concludes. “With Solace, I tried to offer something that enlightens, elevates and touches the soul.”