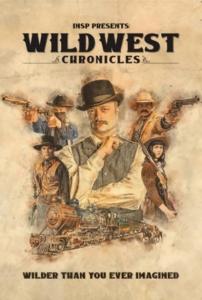 …an ingenious amalgamation of drama and documentary…”
— Cowboys & Indians magazine

INDIAN LAND, SC, UNITED STATES, July 15, 2021 /EINPresswire.com/ — On the heels of the season finale of its highest-rated original series Wild West Chronicles, general entertainment network INSP announced that it has greenlit two more seasons of the popular historical anthology docudrama. Doug Butts, SVP of Programming for INSP, made the announcement.

“We knew early on that we had something special in Wild West Chronicles,” said Butts, “and viewers have confirmed it. Each week, audiences came back to hear about the people and the true tales of the American West. Some names are familiar, like Butch Cassidy and the Sundance Kid, Wild Bill Hickok, and Annie Oakley. But our viewers also loved hearing the true stories of other, unsung trailblazers as well, including Bass Reeves, Doc Susie, Elfego Baca and more.”

In Wild West Chronicles, the legendary Bat Masterson, once a feared gunslinger and lawman, trades his sheriff’s badge for a pen and becomes a newspaper reporter. Although he once chased outlaws, he now chases stories, and beneath his front-page headlines, fearless lawmen and ruthless outlaws ride once more. On a quest to separate fact from fiction, Masterson traverses the country to uncover the true stories behind these incredible historical events. A bygone age of hardship and lawlessness is brought to life as eyewitnesses share their vivid memories of many of the most notorious characters of the Wild West.

Butts continued, “The ratings success, along with overwhelmingly positive feedback from viewers, was the deciding factor to greenlight more episodes. Production is scheduled to begin later this year, and the writers are pouring over historical archives and rare documents to find even more of the rich and diverse stories audiences loved in Season 1.”

Wild West Chronicles is produced for INSP by MorningStar Entertainment.

About MorningStar Entertainment
Gary Tarpinian and Paninee Theeranuntawat created MorningStar Entertainment with the goal of producing high-quality Television Programing. Over the past 20 years, this Emmy Award winning Production Company has produced hundreds of hours of great Television Series and Specials for such esteemed US networks as Discovery, National Geographic, History, The CW Network, PBS, A&E, TLC, Lifetime, Travel, ESPN, Discovery Science, and many others. They have also worked with or had their programs air on such respected international networks as Channel 5 UK, RTL Germany, RAI-Italy, France 5, Antena 3 – Spain, the Australian Broadcasting Company and many others. Among MorningStar’s best known programs are the hit series Deadliest Warrior, Manhunters: Fugitive Task Force, Mysteries Decoded and their latest top-rated Special: Nova’s Hindenburg: The New Evidence.