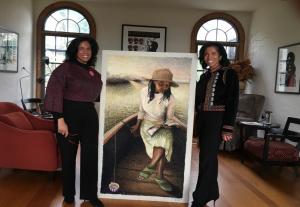 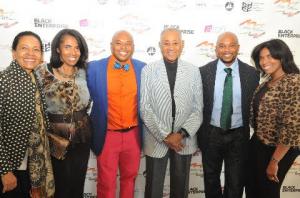 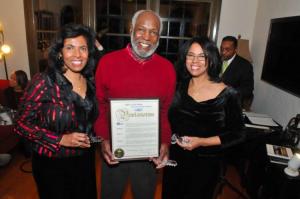 Even the pandemic could not stop the Mackey Twins from representing artists and educating people about African American fine art.

Our parents never told us we had to get married. They said be able to provide for yourself, own a home and pursue your passions.”
— Karen Mackey

Three decades later and the Mackey’s young love of art has evolved. They are now a fine arts trifecta – collectors, dealers under their Mackey Twins Art Gallery brand, and business representatives of many of the African American artists they collect – including Denmark, a contemporary of Jacob Lawrence and Romare Bearden.
They also represent newsprint and mixed media artist Leroy Campbell, Stacey Brown, whose work is featured in the Netflix series, Grand Army, Magno Laracuente, an international award winner with works in the El Museo del Barrio’s permanent collection, Xenobia Bailey, whose work adorns Manhattan’s newest subway station, at 34th Street and 11th Avenue, identical twin artists Terry and Jerry Lynn, known as TWIN, wire sculpture artist Alyce Faye Jarrett, Essud Fungcap, whose work combines different mediums, hand-embroidered tapestry artist Ruth Miller, Charly Palmer, commissioned by Time magazine in 2020 for ‘In Her Eyes,’ which was used for cover art and whose work John Legend used as the cover for his ‘Bigger Love’ cd, and the Elizabeth Catlett estate.

The Mackey twins have curated more than 100 art shows in the tri-state area, including at theSchomburg Center for Research in Black Culture, the Central Park Arsenal Gallery, The Riverside Church, The Gatehouse, and at their Mount Vernon, NY homes. The featured artists are often in attendance at a Mackey Twins show, able to meet buyers and give added perspective on their work – much of it created specifically for the Mackey Twins.

The Mackey Twins’ biannual shows at Manhattan’s Interchurch Center were a hot ticket before the 2020 pandemic forced shutdown – though they continued to sell their artists’ work through their website, www.MackeyTwinsArtGallery.com.

Born and raised in Queens, NY, the sisters were raised by parents who taught them to be independent thinkers. “We grew up in a homogenous environment,” Sharon said. “Our parents and grandparents raised us. Our father and grandfather cooked, combed our hair. Our lives were shaped by that intergenerational family dynamic.”
“Our parents never told us we had to get married,” Karen said. “They said be able to provide for yourself, own a home and pursue your passions. Annual childhood family trips to visit relatives in North Carolina exposed the twins to the ugly realities of segregation. “We could stop at service stations for gas but could not use the restrooms,” Karen said. “We could board the Chesapeake Bay ferry but had to stay in the Blacks only section.”

“Those experiences left an impression,” Sharon said. “Our parents fought for equal rights and social justice and taught us to do the same. When we became teachers in the city public high schools, part of our mission was to teach all students about black culture – even in the school where we were called the ‘n’ word. “That experience and others like it helped us see how much Black life, history, literature and more were not included in the American story,” Karen said. “And that fueled our passion and dedication to black art.” “Our parents taught us to be mission driven,” Sharon said. “Though they were not art collectors, they applauded our art mission.”
Their upbringing gave the pair a fierce independence and determination to choose their life paths that saw them through the New York City public schools, degrees from the City University of New York, a decade of teaching in the New York City public schools, and a variety of private sector jobs, sometimes at the same company, like now: currently Karen is Vice President for Government, Community and Cultural Affairs with the City College of New York (CUNY), where Sharon is Executive Director in the school of Continuing and Professional Studies.

Their evolution from art collectors to dealers and artist representatives was more direct – and Leroy Campbell and art dealer Freddie Barber were the heart of it.
Barber ran an Englewood, NJ gallery specializing in African American art. He gave the twins a payment plan so they could buy art on a budget. “He said I’ll hold the piece, you go on a payment plan that you can afford every month,” Sharon said. “He’d target us with new pieces before we’d even finish paying for one. At one point we had three payment plans at one time.” It was a financing plan the sisters readily adopted when they started their own gallery.

The nascent art dealers, who built their buyer mailing list by mailing and walking art sale notices door to door 20 years ago, once almost sold out at two shows featuring James Denmark and Leroy Campbell respectively. Although sales are critical, art education remains a priority. The Mackey Twins have received many awards for their work in the arts, including the Key to the City of Mount Vernon for their art advocacy, and the National Council of Artists Black History Makers Award. They were also given the Westchester County African American Advisory Board’s 2015 Trailblazer Award.

“We are eternally indebted to Freddie Barber for paving the way for us, and to Leroy Campbell for taking a chance on the ‘newbies,” the twins said. “We are also thankful to all of our artists for their trust and belief in us.”