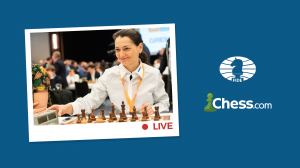 It is the first time the rights for top women competitions are getting acquired, and we are genuinely proud that the vision championed by FIDE is getting shared by a major online platform”
— FIDE Director-General Emil Sutovsky

“We’re more excited than ever about highlighting the talent in top-level women’s chess,” said Chief Chess Officer Danny Rensch. “The Women’s Speed Chess Championship was awesome and featured the highest-ever prize fund for a women's online competition, and we're thrilled to partner with FIDE to help shed a spotlight on the biggest stages of women’s chess.”

"FIDE is excited about this new agreement,” said FIDE Director-General Emil Sutovsky. “Its scope ensures a wider exposure for our official events, and in particular we are happy to partner with Chess.com to promote the best women chess players. It is the first time the rights for top women competitions are getting acquired, and we are genuinely proud that the vision championed by FIDE is getting shared by a major online platform. We spare no effort to constantly improve the coverage of our events, making it accessible for both hardcore chess fans and players who just discover the magic of the game. Our partnership with Chess.com will take this experience to a new height, and we are committed to making it distinctively special," Director-General Sutovsky said.

Chess.com has become the top global chess broadcaster through its channels on Chess.com/TV, Twitch and YouTube. Earlier this year, Chess.com’s PogChamps influencer chess tournament reached 28 million live views among the highly coveted 18-34 advertiser demographic. The peak concurrent viewership in the chess category reached 375,000 making chess one of the Top 10 most popular games on Twitch during that time.

“We have been, and continue to be, incredibly proud to support women’s chess in all ways,” said Austin Gasparini, Chess.com’s Director of Business Development. “From increasing the prize fund of this year’s 2021 FIDE Chess.com Women’s Speed Chess Championship to be the richest online women’s chess prize fund in history, to striking this historic deal with FIDE to cover all of the most critical women’s tournaments in professional chess, Chess.com is dedicated to growing the game for players and fans equally around the world. We look forward to innovating and investing in our chess coverage to maximize women’s visibility and participation in the sport in the coming years.”

Chess.com has hired 5x sports Emmy award winner Alex Brewer as Director of Programming to support the growing popularity in chess entertainment. Formerly an associate manager at ESPN, Brewer's career spanned content creation and production operations roles working on key company priorities such as ESPN+, College Gameday, and SportsCenter. Before his departure, he worked within ESPN's Programming and Acquisitions group, specifically supporting original content creation for ESPN+ and 30 for 30 brands. At Chess.com, Brewer will oversee the day-to-day operations of chess programming and oversee the production of a wide range of events for a growing audience of fans worldwide.

“My mission now shifts from a career in sports media to the amazing world of chess, where I will strive to support this great community with the best content and events possible.”

The International Chess Federation (FIDE) is the governing body of the sport of chess, and it regulates all international chess competitions. Constituted as a non-governmental institution, it was recognized by the International Olympic Committee as a Global Sporting Organization in 1999.

Founded in 2005, Chess.com is the world's largest chess site and leader in chess news, lessons, events, and entertainment. It also owns and operates ChessKid, the #1 place for kids to learn & play chess! More than 10 million chess games are played online every day. Visit Chess.com to play, learn, and connect with chess—the world’s most popular game.