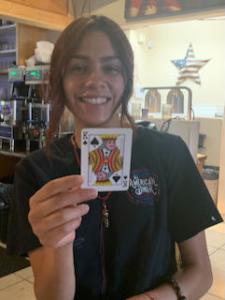 Elsa Garcia of the American Diner in Page, Utah 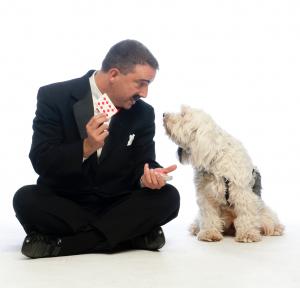 Overnight in Page, AZ. 46 States to Go, with their mission to "Connect with Magic."

When are you coming through again?”
— Lucian Dan ("Call me Dan"), Manager of the Rodeway Inn, Page, AZ

PAGE, AZ, UNITED STATES OF AMERICA, July 13, 2021 /EINPresswire.com/ — Reached in his four star room at a resort on Lake Powell, magician Ash K. wondered aloud as to the sanity of his business manager and fellow magician Kevin the Cap. "When Kevin said that people will think that he and David Copperfield are close friends when they see this picture, I did as he asked, took the picture in the elevator, and then excused myself to go do something not completely insane."

Mr. K. continued: "When the Las Vegas entertainment journalists completely ignored our 48 state, 120 day tour, I was non-plussed, but little Kevin was devastated." Mr. K. gesticulated, imitating his famously expressive colleague, "'They just don't get it!' Kevin was mumbling. I explained patiently that they did, that as Las Vegas is recovering from the pandemic, and that finally Las Vegas is the unofficial capital of magic in the world, with world-class magicians practically on every corner. Kevin got emphatic and said, 'But we're leaving! We are passing through!'"

Mr. K. paused for a moment, then shrugged. "I think it's hard to be Kevin, sometimes."

The two made time to enjoy the shows of Copperfield, Penn & Teller, Mac King, and Piff the Magic Dragon. Kevin opined, "Mr. Piffles is unquestionably gifted, but Piff's comedic partner Jade Simone takes the show to an 'eleven.'" Asked as to their favorite show of the four, Ash K. demurred, "Don't make us pick a favorite child. They are all giants in our profession, and worth every dime for you to see yourself."

"Connect with Magic" Mission Continues
At every stop, whether getting gasoline or coffee or directions, the two magicians offer to show a trick or two to interested persons, and their enthusiasm is infectious.

"Two gentlemen at the counter of the American Diner in Cedar City, Utah, weren't too interested, but the young lady working that day took a minute to watch a trick," explained Kevin the Cap.

"How did you do that?!" exclaimed Elsa Garcia, holding evidence of the miracle she'd witnessed inches away.

The goal has always been to bring magic to people after a hard time for the country. Reached at his Rodeway Inn a mile away in Page, Arizona, Kevin explained, "Magic is a want, not a need, and people have zero reason to know what a magic show costs. By both publishing our many kinds of shows, even close-up, strolling magic with cards and coins for guests, to Ash K.'s library shows, to my magic classes for adults and kids, we make sure the only surprise you get is us exceeding every expectation you have of us. Whether it's summer camp shows, retirement communities, libraries, or a home kids party, we have something for everybody … and no hidden fees or charges."

"You have to see this," said the Rodeway Inn's front desk worker Terrell Kidd to his manager, Lucian Dan ("But call me 'Dan,'" requested Mr. Dan.) Mr. Kidd and the manager watched as objects leapt impossible distances, and changed before their eyes. "When are you coming through again?" asked Dan.

Two Different Styles
Ash K., aka Northern California’s funniest magician, was named the BayList Winner in the arts & entertainment category by readers of The San Francisco Chronicle and SFGate.com. Hailing from the tiny Eastern European country of Balka (he helpfully explains, "Go to Poland, and make a right – can't miss it."), Ash K. is often described with quirky and vaudeville come to life.

Kevin the Cap practices what he calls Smart Magic for Smart People. Like Ash K., he is a Magician Member in good standing of the internationally recognized Academy of Magical Arts, known for its clubhouse, Hollywood's Magic Castle.
Kevin noted, "We have another fixable problem: several inquiries on social media are asking, 'When/where can we see the show?' when we are touring only because of the bookings we receive.

Back at his temporary lair, Ash K. explained, "Kevin made it super easy. You just go to the website, MagicShowDriveAcrossAmerica.com, pick which one of us you want to see, and which show – from strolling magic to a full stage show – and fill out the form. Kevin then confirms, you sign and get us your deposit, and you're all set for seeing some GREAT magic, LIVE! No Zoom shows on this tour!"

About the Shows
“Our shows are quite different,” explained Ash K., or as his friends call him, Ash. “Kevin is the gentleman conman – utterly charming, and his magic is stellar.” Kevin then offered his description of Ash K.: “Ash K. is something from a century ago: a vaudeville act, complete with his inimitable accent. Quirky, and big fun. We think it’s nice to give bookers and audiences a choice.” Their route will take them from sea to shining sea, you’ll be able to chart their journey on their website, MagicShowDriveAcrossAmerica.com.

From major cities to farming towns, they intend to perform for people in all manner of places: libraries, retirement communities, regional theaters, summer camps – even private parties along the route. “And magic classes!” chimed in Ash K. “Be sure to mention the magic classes Kevin teaches to adults, kids, or both!”

“The object is that three letter word: fun,” said Kevin. “It’s been a tough year-plus for humanity, and Ash K. and I decided that driving our two shows across the country, bringing them to audiences of all kinds, would be a great chance for people to see our shows who otherwise couldn’t. We are coming to YOU.”

Magician Ash K. and I, Kevin the Cap, are so eager to perform for you America!