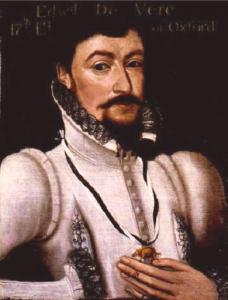 Look closely. This is no tautology. Gontar provides masses of compelling stylometric evidence. Consider for example Jaques’ immortal declaration in As You Like It that “All the world’s a stage.” (2.7.139) 34 years earlier in Damon and Pithias a character expostulates: “Pythagoras said that the world was like a stage, where many play their parts . . . .” (Damon and Pithias, Sc. 7, 84-85) Or consider that we find a character in Damon and Pithias by the name of “Stephano,” the same name (and personality) of someone in The Tempest. Copious examples of Oxford’s youthful poetry are provided which resonate when compared to lines in Damon and Pithias and the canon. There is no getting around it. Gontar renders our insights plentiful and gratifying and when we reach the last paragraph we experience a rare satisfaction. Nor is he alone in his convictions. Noted Shakespeare authority Michael Delahoyde alerted his colleagues as far back as 2005 about Damon and Pithias, up to that time misattributed to one Richard Edwardes, a mere court composer.

The achievement of David Gontar is not being the first to have doubts about “Shakespeare,” but his unrelenting assembling of facts which now persuade even ardent Stratfordians that they have gone astray. Asked whether the years of painstaking research and development have been worth it, David has a favorite answer, “All you have to do is just get to the finish line. Everybody wins.”