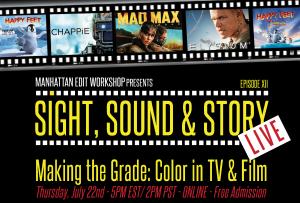 Inside Episode XII: The colorist's contribution to a film goes beyond just making the scenes and images look good. A great colorist will draw the audience's eye to what is important in the story and magnify the emotional tone of the film in ways that can be subtle yet powerful.

Join us for this special conversation with senior colorists Andrea Chlebak (“Watchmen,” “Elysium,” “An American Pickle”) and Eric Whipp (“Mad Max: Fury Road,” “Happy Feet,” “Lego Movie 2: the Second Part”) as they discuss the creative process of color grading in their work. Jason Druss, Senior Product Marketing Manager at Frame.io., will guide the conversation as well as show examples of how Andrea and Eric use color to connect with audiences. There will be a section for all attendees to ask questions during this event.

This event wouldn’t be possible without our Master Storyteller Sponsors: OWC, American Cinema Editors, & EditFest Global; as well as our Technology Sponsor: AJA. We are also grateful for the continued support of our invaluable partners ProductionHUB, Digital Cinema Society, LAPPG, NYWIFT, Film Fatales, and The D-Word.

To register, please go to: https://bit.ly/3wKrjC1

About Our Panelists:
Andrea Chlebak, has spent the past 16 years honing her skills as a colorist for major studios and indies alike.

Canadian-born, Chlebak’s recent work has included supervising color for Seth Rogen’s “An American Pickle” for HBOMax, as well as collaborating for a third time with award-winning cinematographer Gregory Middleton ASC to supervise color for Netflix’s feature “A Babysitter’s Guide to Monsterhunting”.

Starting out as a graphic artist and photographer, then editor and compositor, the opportunity to become a colorist in 2006 was a turning point for Chlebak. Her multi-disciplinary background has spanned features, docu-series and commercials. Major credits include Hollywood studio films such as Neill Blomkamp’s “Elysium” and “Chappie”, as well as award-winning indies “Mandy” and “Prospect”. Her career has taken her to some of the industry’s leading post-production houses including Deluxe, EFILM, Encore, Company3, and Digital Film Central.

Jason Druss is a Sr. Product Marketing Manager at Frame.io and freelance colorist. Previously a Sr. Colorist at WarnerMedia Studios and Colorist at NFL Films, Jason specializes in advertising, branded content and documentary work. Living in NJ, Jason loves working on his house and geeking out about the future of post-production and collaborative technologies in filmmaking.

Eric Whipp was born in Auckland, New Zealand, and raised in Australia. He became a colorist in the 1990s and helped George Miller with his Oscar-winning film, “Happy Feet.” Today he is a Co-Founder and Senior Colorist at Alter Ego in Toronto, Canada.

He reunited with George Miller for the ground-breaking film “Mad Max: Fury Road.” He most recently finished “The Lego Movie 2: The Second Part.”

*All speakers are subject to availability