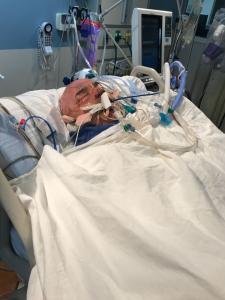 To better focus on business Robert G Hetsler Jr. wanted off the opiates doctors kept him on since 2017 when his new Roush Ford Mustang blew up with him inside

JACKSONVILLE, FL, UNITED STATES, July 12, 2021 /EINPresswire.com/ — A self-made Florida entrepreneurs’ life has been forever changed after a fiery malfunction sent his health and businesses up in smoke. Robert Hetsler Jr., who lives in Jacksonville, has been left with horrific burns on over 70% of his body and a long road to recovery after his modified Ford Roush Mustang exploded, while idling, in November of 2017.

The newly purchased Roush Ford Mustang was a gift to one of his younger employees. With the employee unable to afford such a vehicle, Hetsler purchased the Mustang so that the young man could acquire the vehicle of his dreams with no interest- just minor contributions from his salary. This was just one of many kind gestures that Hetsler is known for.

When first responders got on scene Hetsler told them the vehicle “just blew up” before passing out from his horrific injuries. When he arrived at the emergency room the doctors gave him a less than 5% chance of survival. Hetsler’s burns and injuries were so bad that he was kept in a chemically induced coma for 8 months. Upon waking from the coma Hetsler found that his entire world would never be what it once was. At this point Hetsler still had both hands and a single finger left but before long both hands would require amputation to add to the right ear that was already gone.

Not only were all his businesses and assets liquidated and gone but due to the extreme nature of his injuries he had to rely on the strongest opiate medications available for pain management. Like most people today, Hetsler knew what he was in for when the time came that he no longer needed opiate medication anymore. Robert Hetsler Jr. would spend a total of 18 months in the hospital recovering from the fire.

After returning home, Hetsler had to learn how to navigate day to day life without the use of hands or being able to walk all while also being on high doses of opiates. It took many months of therapy and practice, but Hetsler defied the doctor’s expectations and was able to walk again. Hetsler knew that if he could overcome his wheelchair and walk again then he could still do anything he set his mind to, including getting his businesses started again. It would require physical pain and dedication, but Hetsler was ready to do whatever it took to get back on top.

The first and most difficult step to achieving his goals would be to get off the opiates that he had depended on for so long to just be able function daily. Hetsler specializes in real estate and accounting which require a sharp and focused mind that opiates do not afford. Hetsler wanted to be dependent free of the opiates without having to go through months of being tapered off the medication followed by the horrible withdrawal effects. After exhaustive research, a solution was found.

Accelerated Neuro-Regulation (ANR) is an opiate detox program created by Dr. Andre Waismann in Israel in 1997 (Barzilai University Medical Center). This program works by putting the patient under heavy sedation and then chemicals are used to push the opiates out of their system and clean and open the dopamine receptors again to function at a pre-opiate level. In a matter of a day and a half the patient is free of any withdrawals and their brain is back functioning as if they had never taken any opiates to begin with (ANR Clinic). For years, this procedure was only available outside the United States. Dr. Waismann was finally able to open the first ANR facility in the US just a couple of years ago in Florida. Hetsler seized on the opportunity to utilize this procedure. On December 11, 2020, Hetsler underwent the ANR procedure. To his delight, the procedure worked exactly as described. Now, with a clear head and a sharp focus, Robert Hetsler Jr. was able to focus on what he does best and that is build businesses. Hetsler was able to do what a lot of people have found impossible and that is to kick and opiate dependance in 24 hours and never have the desire to look back. Now, Hetsler has a desire to share his story of tragedy with people the world over in hopes they can use it to find strength and hope of their own. Follow Robert G Hetsler Jr. on Facebook, LinkedIn, and Twitter