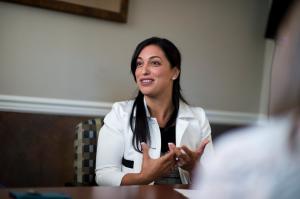 Save your money and stay away.”
— Suzan Ellis Jones

MEDFORD, OR, UNITED STATES, July 9, 2021 /EINPresswire.com/ — Baker County Republican Chair, Suzan Ellis Jones, told the Jessica Gomez for Governor Campaign to “save your money and stay away” from the Miners’ Jubilee event in Baker City, Oregon on July 16-18, 2021.

Ms. Gomez announced her candidacy for Governor of Oregon on June 8, 2021. She is running as a Republican candidate. Ms. Gomez’s campaign team contacted Ms. Jones on three separate occasions in an attempt to schedule a time to participate in the Baker County Republican booth at the Miners’ Jubilee.

On Friday, July 2, 2021, Ms. Gomez’s Campaign Director, Kate Firmin, finally reached Ms. Jones. Ms. Firmin was told there is a “hometown” candidate running for Governor– Ms. Jones’ daughter Kerry McQuisten — and the Baker County Republican booth could not accommodate a time slot for Ms. Gomez at the Miners' Jubilee. According to Ms. Jones, “All of the time slots are full for the entire weekend and the best I might do is the last time slot on Sunday at closing.” Ms. Jones would not provide details for when Ms. Gomez could appear at the booth and, when pressed to give a specific time, Ms. Jones responded, “We’ll see.” During this conversation, Ms. Jones also said Ms. Gomez’s campaign should “save your time and money and stay away” from the Miners’ Jubilee.

“I stand with the people of Baker County and defend their right to hear from more than one gubernatorial candidate. This is how democracy works,” said Ms. Gomez. “Eastern Oregon counties, and the Oregonians who live there, have been badly ignored and under-represented by our state leadership. I intend to listen, engage and find solutions for all Oregonians, and that starts by meeting as many people as possible where they live and work.”

Ms. Gomez believes it is imperative for people to meet as many elected officials, and candidates, as they can. Likewise, she is dedicated to talking to as many Oregonians as possible so that people’s challenges can be understood, and solutions can be found.“Let’s set aside rigid ideology and partisanship for practical down-to-earth solutions,” said Ms. Gomez. “All Oregonians should have a voice. We all deserve the opportunity to truly thrive, not just barely survive.”