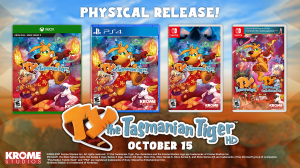 BRISBANE, AUSTRALIA, July 8, 2021 /EINPresswire.com/ — The Aussie mascot platformer is busting out of the digital realm with a bonza BOX! Krome Studios and U&I Entertainment are proud to announce TY the Tasmanian Tiger™ HD is shipping out from stores on October 15th.

Originally published by Electronic Arts in 2002, this classic character platformer is enjoying a modern comeback. “Everyone worldwide will have the opportunity to hold a physical copy,” shares Felipe Rojo, Head of Partnerships of U&I Entertainment. "We’re excited by the opportunity to bring TY the Tasmanian Tiger to stores.”

Thanks to a tremendously successful Kickstarter campaign, fans helped bring TY the Tasmanian Tiger HD to Nintendo Switch™, Xbox One, and PlayStation®4. Now physical copies will be available to keep or give to a mate.

Steve Stamatiadis, Krome Studio’s Creative Director shares, “I’m honored to think that 20 years later, fans of the series will be able to enjoy copies in hand and proudly displayed on a shelf, and that includes me!”

About Krome Studios
Krome is a professional game development studio based in Brisbane, Australia. Founded in 1999, it has shipped over 45 titles with partners and publishers worldwide including Disney Interactive Inc., Microsoft™, LucasArts™, Activision®, Electronic Arts™, Vivendi Universal and Konami® Digital Entertainment.