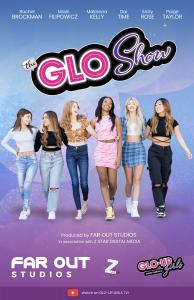 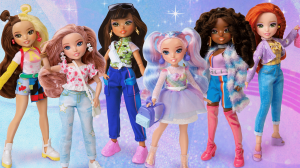 EL SEGUNDO, CA, UNITED STATES, July 7, 2021 /EINPresswire.com/ — Far Out Toys announced today that The GLO Show, produced by Far Out Studios, will premiere on July 17 – satisfying millions of fans eagerly awaiting the series. The show will run for seven episodes in Season 1, with a new episode released weekly on the GLO UP GIRLS TV YouTube channel. The series’ first official trailer was released today on www.gloupgirls.tv.

The GLO Show is a reality TV style series that follows six real-life teenage social media influencers as they live in the luxurious “GLO House.” Each episode, they receive challenges that encourage them not only to try on new looks, but also to achieve their life goals. They learn that a little #glotivation is all you need to take on the world!

To celebrate the show’s premiere on July 17, Far Out Toys in association with ZStar Digital Media is holding a Los Angeles press event and launch party. The event will bring 200+ major influencers together in an immersive “Studio GLO” experience and will be the first opportunity for media and VIP guests to view not-yet-released episodes. The GLO Show cast will be in attendance for meet and greets and interviews, including Dai Time, Sicily Rose, Madi Filipowicz, Rachel Brockman, Makenna Kelly, Paige Taylor, as well as TikTok heartthrobs Cole Allison and Enzo Torres.

Far Out Toys also announced its US retail plan for GLO-UP Girls dolls this Fall. The line will be available first on approximately August 13 on Target.com, and in September will roll out to Amazon and Walmart.com, as well as select brick & mortar retailers. The line will launch globally in August, with mass in-store placement in the UK, Ireland, Scandinavia, and Australia.

About GLO-UP Girls
The GLO-Up Girls fashion doll line builds on the massive cultural phenomenon of #GlowUp – a hashtag with more than 28 billion video views on TikTok. The dolls feature elevated styling and offer the full “GLO-Up” experience including spa, nails, hair, makeup and fashion choices. Each doll comes in stylish pajamas and more than 25 surprises to give your doll a total GLO-Up. In addition, each doll comes with a real beauty mask for the girl! Six different characters will be introduced in Series 1, with a retail price of approximately $19.99 USD each.

About Far Out Toys
Far Out Toys Inc. is a rapidly growing force in the global toy marketplace, with a mission to innovate to the outer reaches. Far Out Toys leverages its expertise and extensive relationships with inventors, global distributors, IP holders and mass retailers to launch brands across categories – including vehicles, games, licensed collectibles, electronic toys and fashion dolls. For more information, visit www.farouttoysinc.com.