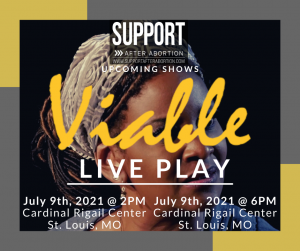 The Truth about Abortion in One Act

LIVE in at the Cardinal Rigali Center, in St. Louis, MO, Support After Abortion hosts the off Broadway play VIABLE.

WHAT: 22 million men and women in the US are hurting after abortion. They need and deserve healing. Walk in one family’s journey to finding hope and healing after the pain of abortion by watching the live performance of Viable. This play, recently performed on the capital steps in Jefferson City, Missouri to a crowd of 2,000 is free to attend thanks to the sponsorship of Support After Abortion.

Support After Abortion is sponsoring Viable in an unprecedented prolife tour across the United States in an effort to change the conversation about abortion. 25% of women who have had an abortion will have a second one. Imagine the impact healing would have on the demand for abortion? Lisa Rowe, CEO of Support After Abortion, and Viable’s actors and
playwright will be available for interview after each performance.