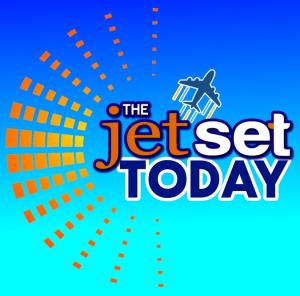 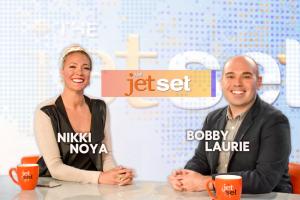 This morning the travel show launched "The Jet Set TODAY," a daily podcast aimed at keeping avid and leisure travelers updated with the latest industry news and events. Premiering this morning on Spotify, AnchorFM, and shortly available everywhere podcasts are found, the show notes either Bobby Laurie or Nikki Noya will deliver the day's top headlines Monday through Friday in aviation, cruising, hospitality, rail, and rental cars. "The Jet Set TODAY" will also have a focus on news coming out airplane cabins that would affect flight attendants.

"As a former flight attendant I know that cabin crews like to 'debrief' and share stories of what happened on other flights around the country and they also recognize what happens somewhere else could happen at their airline. So, we hope to deliver the day's headlines and a little bit of news for the Savvy Stews out there," said co-host Bobby Laurie. Laurie owns the trademark to the phrase "Savvy Stews" which originated as a travel-themed website prior to The Jet Set and TheJetSet.tv

The first episode of the daily podcast featured stories about the rise in prices for Royal Caribbean cruises for unvaccinated travelers, Disney Dream's test sailing delay, and a little-known story about a former "Saturday Night Live" star that was recently removed from a flight.

Co-host Nikki Noya added "we're so happy and grateful that the television show continues to thrive… with more viewers finding us each week. The number one thing we hear from viewers is that they want more of our news update and lively discussion which starts every show so we thought delivering the headlines daily would be a great companion to our weekly broadcast."