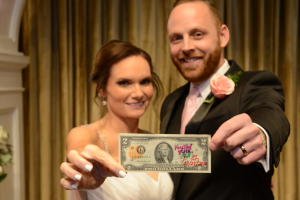 SCOTTSDALE, ARIZONA, UNITED STATES, July 1, 2021 /EINPresswire.com/ — Director of Wholesale Operations Jacob Glick was married in February 2020. Jacob wanted the event to be as memorable and unique as possible. He opted for a non-traditional wedding at the French Quarter Wedding Chapel in New Orleans, Louisiana.

It was extremely important to Jacob and his soon-to-be wife that their wedding reflect their personalities. This is a large part of why they chose not to have a traditional-style wedding. They traveled to the French Quarter for this event of a lifetime and couldn't be happier with their decision. The day was full of friends, family, fun, and love and included a parade that ended at House of the Rising Sun, which was the location of their reception. The French Quarter Wedding Chapel is the only wedding chapel in the French Quarter and it’s open 24 hours, 7 days a week. It has a long history and allows for both traditional and more customized, themed ceremonies.

Jacob Glick and his new wife decided to go along with an odd tradition that has become rather commonplace at the French Quarter Wedding Chapel. This ritual consists of a newly married couple securing a dollar bill to the ceiling after signing their names to it. This silly yet romantic act is one that newlyweds are sure to remember for a long time. Doing this not only allows the couple to sign new names (if they chose to take their partner’s last name) but also connects them to the history of this chapel.

After signing their dollar bill, the couple uses a long pole and may need to take multiple stabs with it to secure it to the ceiling. There are now a large number of these stuck to the French Quarter Wedding Chapel ceiling. Jacob and his wife opted to use a 2 dollar bill to represent two people becoming a union. They also chose a bill that has an orange paw print on it, which is usually only seen in this area and at times when the Clemson University football team plays against Louisiana State University.

Jacob Glick – a Grand Start for the Future

Jacob Glick and his wife have been married for a year and have used IVF to have their second child. This is a somewhat controversial medical treatment, yet Jacob and many other people have been successful at using it.