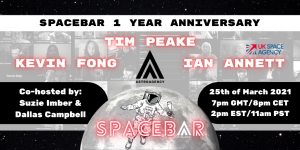 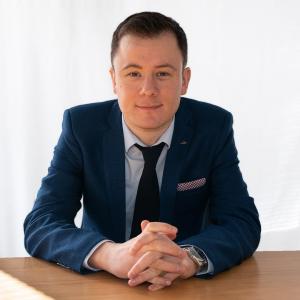 To be recognised at such a prestigious space industry event, along with our commitment to educational outreach and growing a more diverse and inclusive workforce, is special.”
— Daniel Smith, AstroAgency’s Founder and Creative Director

AstroAgency are one of three finalists selected for both awards, which will be presented by the world’s longest established organisation dedicated to the promotion of space exploration and astronautics. Established in 1933, the British Interplanetary Society aims to increase public and stakeholder engagement with space, and since 2005 have presented the annual Sir Arthur Clarke awards to recognise outstanding achievements in space activities. The BIS, in conjunction with the Arthur C. Clarke Foundation, invited nominations from the general public and a nominations panel of senior representatives from all areas of the space sector. A total of 166 nominations for 82 nominees were received this year – a record for the ‘Arthurs’.

The SpaceBar, hosted by science broadcaster Dallas Campbell and Dr. Suzie Imber, was established by AstroAgency in response to the COVID-19 pandemic as a way to encourage informal networking and knowledge sharing among the world-wide space community. The sessions are held on video-conferencing platform Zoom, where participants are invited to engage with a wide range of topics — from Artificial Intelligence to space tourism — during interactive discussion panels moderated by space industry experts. Participants have included representatives from the European Space Agency, UK Space Agency, NASA and other international space agencies, as well as students looking for career placements, start-ups looking for investment and a number of special guests, including British astronaut Tim Peake.

AstroAgency’s founder Daniel Smith, who has played a key role in establishing four space companies in four years and is also the Co-Chair of the Scottish Space Leadership Council, is nominated for an individual Sir Arthur Clarke award in appreciation of his enthusiasm for supporting the growing UK space sector, and his efforts to encourage the development of a more environmentally conscious, diverse industry.

Smith stated, “There’s no doubt that the last 18 months have been a challenging time to set up and grow any business, so to be finalists in two categories is a testament to our team’s focus on supporting companies across the globe to find opportunities in this incredible sector. For this to be recognised at such a prestigious space industry event, along with our commitment to educational outreach and growing a more diverse and inclusive workforce, is special.”

This level of recognition comes at an already-exciting time for AstroAgency, which within less than two years of operation has already established itself as a global leader in strategic marketing for space companies and those looking to move into the fast-growing sector. The international team of 20, which includes experts both in marketing and space technology, have secured 23 worldwide commercial and government space clients — the latest being German-based company ConstellR, backed by leading SpaceTech investors Seraphim and OHB, who use space data and revolutionary technology to monitor Earth’s land surface temperature.

The BIS awards will be presented at the 2021 Reinventing Space Conference Gala Dinner in London, on Tuesday 29th June.