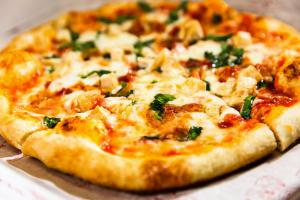 Fly Pie is the first drive-thru pizzeria concept to marry high-quality “culinary cuisine” with family-friendly immersive entertainment. It delivers a safe, fast, and high-quality experience from “takeoff” (ordering) to “landing” (receiving their order) to enjoying one’s meal. Customers are then treated to an immersive entertainment experience as they drive towards the pick-up window, featuring original characters, created by Zuiker, and brought to life by Tremblay Bros. Studios (Looney Tunes, Felix the Cat). Through the adventures of “Lil Churro Tot,” “Mr. Heat,” “Chomp,” and their friends, guests of all ages can enjoy the fun and inspiring stories, in addition to scents such as pizza, cinnamon, and bacon, inspired by the characters and menu items, that fill the air in the drive-thru tunnel.

Guests will notice Fly Pie’s “flight personnel,” proudly display patches denoting their fields of service expertise and personality. Further tapping into the local community it serves, Fly Pie features an original “Art Wall” where local graffiti artists paint something new every three months as a way to bring the community together through positive events. Fly Pie has its own TikTok and Character Walls, complete with multiple backgrounds, where hungry patrons can take selfies with the Fly Pie characters.

“Fly Pie is a community first organization that values the responsibility of serving our members,” said Godino. “This team and the concept we’ve come up with has the opportunity to revolutionize the quick service industry by marrying exceptional food with an entertainment experience like no other.”

“Fly Pie is about heart smiles and great pizza on the fly,” added Zuiker. “Our goal is to be the best part of a family’s day. One trip down our runway, and we believe you will fly with us in every way imaginable.”

Fly Pie also features carry out and contactless delivery, where orders can be placed through the Fly Pie app and planned third-party delivery partners such as Uber Eats, GrubHub, DoorDash and more.

Anthony E. Zuiker is the creator of the phenomenally successful "CSI" franchise, which has earned the title of the "most-watched show in the world" on multiple occasions, spawned three television spin-offs ("CSI: Cyber," "CSI: Miami" and "CSI: New York"), aired hundreds of episodes, and even garnered a Guinness World Record. As one of the most groundbreaking storytellers today, Anthony continues to innovate across every platform from TV to digital to books and Broadway. In addition to helming his own publishing company, Zuiker Press, with wife Michelle, Anthony is also executive producing “Soul Train” the musical for Broadway.

Scott Godino Jr. comes from a long history of successful hospitality businessmen. His grandfather, Andrew Zorne, was the former president of the Mint, Hacienda, and Park Place. Another influential family member is Lou Godino, who owned and operated the highly-touted Town Lounge in Rockford, Illinois. Godino Jr. would blaze his own trail in Las Vegas by creating, owning, and operating “B.A.R. – Born and Raised.” This storied 24/7 hangout features a creative bar fare, outdoor patio, video poker, and a wall of TVs for sports. Godino Jr. hatched the idea of “Fly Pie” after enjoying a slice of pizza at Blaze and then dreaming of creating a drive-thru version.