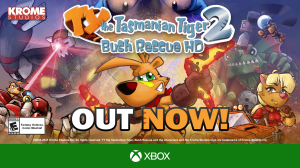 TY the Tasmanian Tiger 2: Bush Rescue HD out now for Xbox One consoles

Practically bursting at the polygons with character, charm and wit, this light-hearted romp around the Australian Outback will have you meeting a diverse cast of critters from intellectual Koalas to a wise-cracking Cockatoo down to a jailbreaking Cassowary who goes by the name of “Boss Cass”.

The game has the player taking the fight to Cass directly with the newly established Bush Rescue. TY and his friends are needed to protect the colorful townsfolk across Southern Rivers from the looming threat presented by Cass and his frilled-neck goons!

“This all-ages game was such a treat on the original Xbox console back in 2004,” reveals Krome Studios CEO, Robert Walsh, “Character platformers are still popular with kids of all ages today.”

Featuring a wide assortment of iconic boomerangs, some new and others returning… (See what we did there?) TY the Tasmanian Tiger, sports a signature boomerang move set consisting of glides, swinging and combat thwacks to help overcome most Bush Rescue missions in the game.

When a rang is not going to cut the mustard, TY has access to a wide variety of vehicles and mechanized suits known as “Bunyips”. Adventure awaits! Hop in the back of Shazza’s trusted 4×4 “Fourbie” to skid into the action, traversing across a lush and interconnected world.

“The adventure continues and expands for all the TY fans that have been anxiously waiting for this next installment of the series.”, voices Steve Stamatiadis, Creative Director at Krome.

After successfully relaunching the first game of the series, the developers at Australian-based Krome Studios have made it their mission to offer the same level of care to this remaster of the classic collect-a-thon platforming sequel. Returning fans are sure to get a kick out of this!

A heightened visual treatment along with many quality-of-life improvements have been made throughout the adventure, likely to surprise and delight original fans while also appealing to a new audience. All the while maintaining that classic retro aesthetic that stays true to the original.

Collect, Complete, Compete. With the help of TY’s fans, Krome added new unlockable skins for both TY and the Fourbie! Video game completionists or speedrunners can take advantage of the newly added Xbox Leaderboards to record their high scores. Add 1000 Gamerscore points with 25 Achievements.

This product is available on the Xbox Games Store as a digital download. For more information, including requests for a review code, please contact press@kromestudios.com.

Krome is a professional game development studio based in Brisbane, Australia. Founded in 1999, it has shipped over 45 titles with partners and publishers worldwide including Disney Interactive Inc., Microsoft™, LucasArts™, Activision®, Electronic Arts™, Vivendi Universal and Konami® Digital Entertainment.