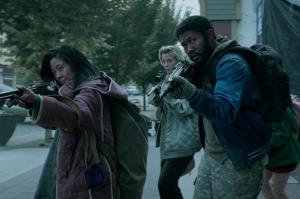 All 3 of the show’s stars will appear with ‘Dead Talk Live’ Host, John Vizaniaris (known as Viz) to talk about and highlight the recent release of Season 2 of ‘Black Summer’ on Netflix.

‘Black Summer’ debut on Netflix in 2019 and fans of the Zombie Apocalypse show have been waiting for Season 2 for quite some time.

‘Dead Talk Live’ also announced a slew of new guests coming up that include:

About Dead Talk Live:
Dead Talk Live is a one-hour TV Talk Show featuring exclusive Celebrity Guest interviews, the latest headlines, news, reviews, trailers, and more. With an existing catalog of over 300 episodes and five new episodes premiering each week, Dead Talk Live gives every Horror Fan an inside look into one of Hollywood’s most successful genres. More information on Dead Talk Live can found on its official website: https://deadtalklive.com. Dead Talk Live is Hosted by the show's creator, John Vizaniaris, who is known as 'Viz' on the show. Dead Talk live is produced by Dead Talk Media LLC which is also owned and operated by its founder John Vizaniaris.