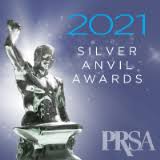 For the promotion of the 75th Commemoration of the End of WWII. The award category was Events and Observances, More Than Seven Days, Government.

We’re very proud of our team. Their dedication and hard work in difficult times helped celebrate the Greatest Generation and those who gave the ultimate sacrifice that we could all live in peace.”
— Patricia Monick, Principal of 4Front Branding

HONOLULU, HI, UNITED STATES, June 25, 2021 /EINPresswire.com/ — On June 11, 2021, the Public Relations Society of America (PRSA), the nation’s leading professional organization serving the communications community, presented its 2021 Silver Anvil Awards. 4Front Branding & Defense Media Activity in tandem were recognized with a Silver Anvil Award for the work they did to promote the 75th Commemoration of the End of WWII. The award category was Events and Observances, More Than Seven Days, Government.

Ceremonies were held first in Washington D.C. on May 8, 2021, marking VE Day, and culminated in Hawaii on September 2, 2021 on the fantail of the Battleship Missouri Memorial, the very ship that on September 2, 1945, in Tokyo Bay, General Douglas MacArthur, Admiral Chester Nimitz and representatives of the Allied Forces accepted Japan’s formal surrender, to bring to an end the bloodiest war in history.

The public relations efforts were far reaching and broad, including local, national, and international with particular attention to military veterans and those who currently serve. To heighten the attention WWII veterans were interviewed and their stories were told in news segments, newspapers, special programming, online in social media and on the dedicated website, 75thwwiicommemoration.org

Due to COVID-19 most of the planned, in-person events were canceled. This meant efforts needed to be stepped up to present as much of the commemorative activities virtually. Programming replaced live events in Washington D.C. that presented the stories of the Greatest Generation and WWII Warbird Flyovers. In Hawaii, while the Commemoration Ceremony was limited to mainly local veterans, press, patriotic entertainment and key speakers, the full ceremony was presented via video link in real time or through a link. A Legacy of Peace Aerial Parade played a pivotal role in ending WWII. A powerful video with vintage footage from the war launched our 75th WWII Commemoration Ceremony, followed by an actual Flyover of WWII Warbirds above the Battleship Missouri Memorial and Pearl Harbor, then a Pass In Review by the USS Michael Murphy. There were tributes to salute and honor the 12 WWII Hawaii veterans in attendance, as well as those WWII veterans locally and outside of Hawaii who had planned and hoped to be present. In the preceding days, the public in Honolulu were able to experience WWII Warbirds in Aerial of Peace Parades over much of the island of Oahu.

“We’re very proud of our team,” stated Patricia Monick, Principal of 4Front Branding. “Their dedication and hard work in the most difficult of times helped celebrate the Greatest Generation and those who gave the ultimate sacrifice that we could all live in peace.”

“Salute Their Service, Honor Their Hope” is the theme of the Commemoration in recognition of the veterans and civilians who fought on the battlefield and served on the homefront during WWII. Stories and the full commemoration are available at 75thwwiicommemoration.org

About the 4Front Branding Team
4Front Branding is a full-service marketing company, specializing in brand development, as well as the stewardship and promotion of brands worldwide promoting clients through all types of communication: advertising, online media, social media, public relations, promotions, and events. To address the RFP for the 75th Commemoration of the End of WWII, a team was expressly recruited to achieve the stated goals of the organization. Believing that this unique event in history would be best served by seeking the expertise and experience of some of the best in their fields, a team was established. It was headed by Patti Freedman and was comprised of other team members who were also veterans of the work on the 75th Commemoration of the Attack on Pearl Harbor, Frank Haas and Holly Cliffe. In addition, they were joined by Teddi Anderson, Andy Arakaki and Anna Covert, along with Tony Vericella, Executive Director, 75th WWII Commemoration Committee.

About Defense Activity Media
Defense Media Activity keeps Department of Defense audiences around the world informed, collects, and preserves the Department’s visual information records and trains the Department’s Public Affairs and Visual Information professionals. DMA is the DoD’s direct line of communication for news and information to U.S. forces deployed worldwide, on land, sea, and air. It presents news, information, and entertainment through media outlets, including radio, TV, Internet, print media, and emerging media technologies. DMA broadcasts radio and television to forces in 177 countries and 279 Navy ships at sea with Department-specific news and information programming. The team who coordinated with 4Front Branding were led by Heather Paynter and Chokechai (Tatum) Vayavananda.