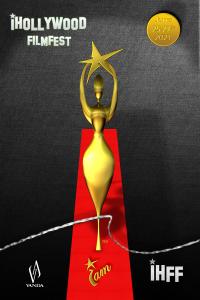 HOLLYWOOD, CA, UNITED STATES, June 24, 2021 /EINPresswire.com/ — The new level of creativity during the pandemic inspired creating of the iHollywood Film Fest which begins on Friday, June 25 – June 27, 2021 at the historic Woman’s Club of Hollywood in Los Angeles.

The film festival was created initially when we saw how filmmakers and storytellers were pivoting. We wanted to spotlight their creativity and encourage creativity, diversity and inspire filmmakers around the world and provide them access to networking and workshops with talent, distribution and film finance. Hollywood is the land of dreams and we wanted to share this hope.

The Icon Awards are being presented to Scott Page for music and technology, Pamela Des Barres for women in rock and roll, Jill Sorenson for women empowerment, David Bianchi for innovation in film, Rachel McCord for transforming influence and international actress Bai Ling.

The iHollywood Film Fest, International Hollywood Film Festival, focuses on content created specifically during the pandemic as well as traditional feature film and mini movie (short films). Due to the pandemic, the festival is a hybrid festival which allows us to open up the festival experience to audiences around the world. The iHollywood Film Fest will be held June 25 – 27, 2021 with over 30 hours of movies, networking, industry and celebrity panels and Q&As, red carpets, after party and NFTs (non-fungible tokens). All films are being screened virtually. The gifting suite and after party are in-person.
For more information regarding the program and the film festival go to www.iHollywoodFilmFest.com.

THE HOLLYWOOD MUSEUM IS THE OFFICIAL MUSEUM OF HOLLYWOOD

About The Hollywood Museum:

The Hollywood Museum in the historic Max Factor Building is a 501(c)(3) non-profit corporation showcasing more than 10,000 Authentic Show Business Treasures, spotlighting 100 years of Hollywood history – from the Silents to Talkies, to Hollywood's Golden Era, Film Noir, Television and its Pioneer Years, through the rebellious 60s, special effects 70s, evolving 80s, involved 90s, technological 2000s, and beyond to current day heartthrobs! The Hollywood Museum's exhibits showcase the best in film, network and cable television, and new digital platforms featuring iconic and fan favorites! The Hollywood Museum in the historic Max Factor Building is the Official Museum of Hollywood and offers visitors the most extensive collection of Hollywood memorabilia in the world – featuring the glamour of Hollywood legends and stars – past, present and in the making. The Hollywood Museum offers one-of-a-kind costumes, props, photographs, scripts, stars' car collections, personal artifacts, posters, and memorabilia from favorite stars, films and TV shows. Located in the heart of Hollywood, at the corner of Hollywood Blvd and Highland Ave, just steps from the Hollywood Walk of Fame, the Hollywood Museum has been named the #1 top tourist attraction in Hollywood by LA Weekly, and one of the "Top 10" Museums in LA by the LA Tourism and Convention Board and Trip Advisor.