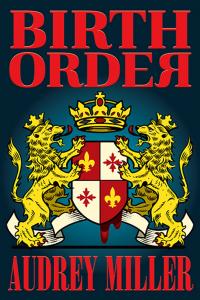 NEW YORK, NY, USA, June 23, 2021 /EINPresswire.com/ — First time author has woven a masterful fictional tale of deception and intrigue around a new birth into the British royal family. Dr. Audrey Miller, a career obstetrician-gynecologist, pens an enthralling story around the 1701 Act of Settlement, which favors the firstborn male instead of the firstborn child.

“Miller’s engaging debut takes readers on a turbulent ride of secrets and betrayal set against a backdrop of royal intrigue.” — BookLife

Drawn in by a tabloid headline, Miller conceived BIRTH ORDER while standing in line at the grocery store, scanning stories about the pregnant Catherine (Kate), Duchess of Cambridge. Was she expecting a boy, a girl, or perhaps twins? What if the girl was positioned to be born first? Miller’s imagination, and her pen, went into overdrive.

“The entire system of primogeniture in the United Kingdom was upended when the Act of Settlement was amended by Queen Elizabeth II in 2013. The Succession to the Crown Act states that the future monarch would now be the first-born child instead of the firstborn male,” said Miller. “The consequences to the amendment could reverberate within the entire peerage system of the UK and end generations of male domination in high-profile and high-powered families. Imagine the lengths royal courtiers would go to maintain the status quo — to keep men in control.”

“Modernity and tradition clash in this conspiracy tale about the British monarchy.” — Kirkus Reviews

Miller’s characters take the reader on a wild ride, exploring a royal family birth, familial battles for power, money and royal recognition, and the increasing ethnically diverse landscape that encroaches on the lives of the landed gentry.

“As a black author, I also wanted BIRTH ORDER to delve into racial divides and perceptions in Britain,” said Miller. “Although Britain doesn’t suffer from the generations of slavery and Jim Crow laws that plague the US to this day, Britain is definitely not immune to racial tensions.”

BIRTH ORDER is published by Beach Read Press and can be purchased online at Amazon, Barnes & Noble, and anywhere that sells books. Find more information at https://audreymillerwrites.com.

About the author: Audrey Miller is a practicing obstetrician/gynecologist with a very vivid imagination. Audrey has blended her keen observational skills with fast-paced storytelling to create scandalous tales about beautiful people. Audrey lives in South Carolina and loves traveling, reading tabloids, mixing cocktails, and lounging with her beloved basset hound, Otis.