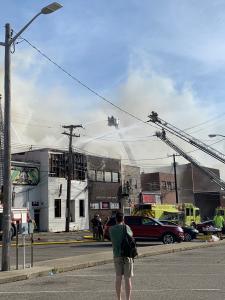 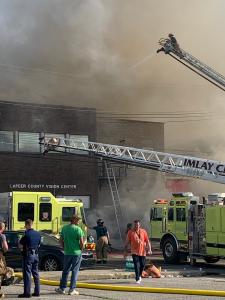 A fire damages several buildings in downtown Lapeer, where City Beat News is headquartered, but the company is committed to meeting its customers' needs

City Beat News was created to encourage and promote ever higher levels of customer satisfaction and service across a range of businesses by giving voice to the broad consensus of customer opinion. ”
— Frank Andrews, Founder, Stirling Center for Excellence

LAPEER, MICHIGAN, UNITED STATES, June 22, 2021 /EINPresswire.com/ — In the early morning hours on Saturday, June 5, a fire started in a building a few doors west of The Stirling Center for Excellence, home of City Beat News, in the historic downtown area of Lapeer. By nightfall, two buildings had been leveled and many others damaged. In the end, however, the positives showed through.

The affected buildings, in the first block east of the historic County Courthouse, housed businesses and apartments. The businesses were empty at that hour and all apartments were successfully evacuated.

While the Stirling Center’s building was the fire stop, it and two other buildings sustained extensive fire, smoke and water damage. The structural integrity of those three buildings are still being assessed.

“The heroes at the fire department were able to stop the flames before they engulfed our building, but not without damage,” said Teresa Hersha, Executive Director of Customer Care for The Stirling Center.

While the full damage is being assessed, the team at City Beat News is working remotely, diligently pushing forward to continue servicing its clients. As a company that prides itself on recognizing and honoring companies for their outstanding customer satisfaction, providing the highest levels of customer service is always a top priority.

“City Beat News and its Spectrum Award were created to encourage and promote ever higher levels of customer satisfaction and service across a range of businesses by giving voice to the broad consensus of customer opinion,” says Frank Andrews, Founder of The Stirling Center for Excellence. “I was told that our communities’ fire response teams distinguished themselves by bringing more than three million gallons of water to bear on a fire that could have devastated a much larger portion of Lapeer’s century-plus-old buildings, while also successfully rescuing a family’s two cats who hunkered down in a dresser drawer throughout the fire and for several days after. They delivered big when that was called for, and kept on the mission until even the most helpless in the face of the disaster were rescued as well. Remarkable.”

About City Beat News
For more than a decade, City Beat News has been calculating customer satisfaction ratings for small and mid-size businesses in a variety of industry segments based on customer feedback online, and then honoring those businesses that provide an outstanding customer experience. Winners are based on City Beat News’ independent, proprietary research and rating system, which combines data collected from nominations, online and other customer reviews, surveys, blogs, social networks, business-rating services, and other honors and accolades — all of which express the voice of the customer. Only those businesses that earn a 4-star or 5-star rating receive The Spectrum Award.

City Beat News benefits both consumers and businesses by providing comprehensive, accurate and unbiased customer experience research on small- and medium-size businesses across the United States and Canada. The focus of the process is not beating down competitors in comparison, or focusing unduly on a rare problem regardless of how loudly an isolated disgruntled customer, employee or competitor may complain, but rather on the degree of customer satisfaction with a given business more broadly and consistently. City Beat News is not about the negativity of businesses competing against one another or a single pejorative voice, but rather each individual business striving for the greatest customer experience they can deliver on a continuous basis, day in and day out. Only a few percent of those businesses come within the net of City Beat News’ broad research and review. Based on its research, City Beat News grants its 4-star or 5-star ratings to those few reaching the highest levels of happy customer experience.

Major factors include the business’s positive feedback, scores and accolades will receive an award page on the City Beat News website. Both business owners and consumers can search the award pages to see who has received top honors.

For more information about City Beat News, call 866-732-9800
or go online to www.citybeatnews.com.