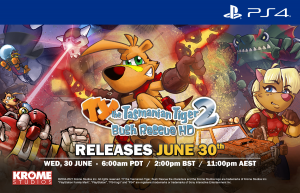 BRISBANE, AUSTRALIA, June 21, 2021 /EINPresswire.com/ — You beauty! Krome Studios is proud to announce that their award-winning game, TY the Tasmanian Tiger™2: Bush Rescue™ is coming to PlayStation®4 systems, starting June 30, 2021. Return to your favorite Aussie mates with this nostalgic re-mastering of the platformer-genre classic.

Fans of the TY the Tasmanian Tiger series boomeranged back for the popular sequel’s Kickstarter campaign, funding the project in a blazing 8.5 hours. One fan shared, “TY 2 was my introduction to TY and let's just say it's a real beauty mates!.” Another fan enthused, “This is my favorite platformer of all time, I've never been this excited for a game!”

Throw boomerangs, bite, smash and glide your way around the Australian Outback and stop the evil plans of the wicked Boss Cass and help the good folk of the little country town of Burramudgee.

“Taking advantage of the power of modern consoles, we’ve enhanced Southern Rivers and added new gameplay too,” explains Lindsay Parmenter, Studio Director at Krome Studios. “Now you can measure your progress against your friends with trophies and leaderboards.”

New to TY the Tasmanian Tiger 2: Bush Rescue HD is a Hardcore Mode, where you only get one life, and the addition of a photo-mode. Thanks to the Kickstarter backers, TY and the Fourbie jeep have heaps of new looks, there are two NEW boomerangs, and a new Bush Rescue Honorary member, too!

* Explore from the beach to the desert to the billabong and beyond in a huge open world of old-school 3D platforming glory.
* Arm yourself with 20 different boomerangs including the classic Ironbark, Flamerang and two NEW rangs!
* Brand new photo-mode.
* A wide variety of vehicles like the Fourbie, cart, and mechs.
* 7 Levels of two-player split-screen cart racing.
* Improved camera & graphics; including updated shadows, reflections and HD resolutions.
* New Gamemode called "Hardcore Mode".
* Character customization with NEW skins for TY and paint for the Fourbie!
* Over 25 Trophies, including a Platinum Trophy, plus Speed Run and Time Attack Leaderboards.
* Audio Director's cut

Fans of the series can access the post-Kickstarter add-on Shoppe, where extra campaign merchandise is available while supplies last. https://ty2hd.backerkit.com/hosted_preorders

Steve Stamatiadis, Creative Director shared, “We’re chuffed that nearly 20 years later, TY the Tasmanian Tiger still has so many people in love with the game and its characters. That’s quite an honor.”

TY the Tasmanian Tiger 2: Bush Rescue HD will be available as a digital-only release through the PlayStation™Store. So don’t be a galah –let’s head down under and have a corker of a time!