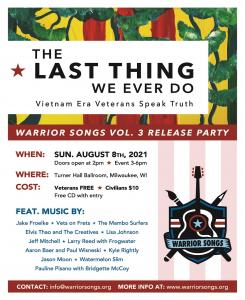 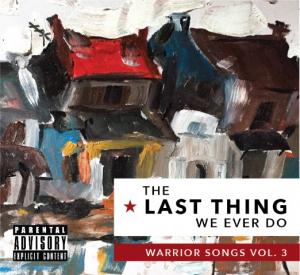 Scheduled for release in August this year is the third album of the Warrior Song Inc. effort, “The Last Thing We Ever Do: Warrior Songs Vol.3.”

USA, June 18, 2021 /EINPresswire.com/ — One of the greatest challenges for war veterans is their reintegration into civilian life. This is where the non-profit Warrior Songs Inc. steps in to help them heal from their war trauma through the creative arts.

“The Last Thing We Ever Do: Warrior Songs Vol.3” is a CD featuring 14 songs. These songs are based on the first-hand experiences and testimonies of veterans from the Vietnam War. Professional songwriters created the music and lyrics based on their touching stories, and the heartfelt songs are performed by professional studio musicians.

Copies of the CDs are made available free of charge to veterans and veteran non-profits, aiming to help them with their healing process. Besides the physical trauma seen in many veterans as a testimony to their years of serving their country, mental trauma is often one of the biggest stumbling blocks to their ability to function normally once more.

“This project was completed thanks to a huge participation from several people,” says Jason Moon, founder of War Songs. The testimonies of nineteen Vietnam veterans were transformed into songs by 21 songwriters. Remarkably, the CD was recorded by 81 studio musicians in 14 different studios scattered across five states in two countries – the USA and Vietnam. This joint project was completed thanks to the participation of a total of 109 artists, including 17 Vietnamese nationals.

“This album is about healing, but most importantly about reconciliation,” continued Jason Moon, an Iraq War veteran himself. Moon was personally plagued by severe PTSD after serving in Iraq between 2003 and 2004. Before his deployment, Moon was a songwriter and singer but found it difficult to overcome his mental anguish upon his return. This made it difficult for him to carve a civilian life. His difficult path to healing started to look brighter once he started meeting other veterans fighting similar challenges.

One of the songs on the album, “Seeds of Peace,” was written by Moon while on a visit to Vietnam in 2019. “Seeds of Peace” was inspired by a shared meal witnessed by Moon in Duc Pho. Present at the meal were former US and Viet Cong war veterans. This shared, and peaceful meal brought out strong emotions in Jason Moon.

Around the table sat a group of former enemies from 50 years ago. They had fought against each other in the very province they were now peacefully sharing a meal. The group of US veterans was led by Chuck Theusch, founder of Children’s Library International.

The recording of the song includes the vocals of Vietnamese children, and the song is about the importance of reconciliation as part of the process of achieving mental healing. The recordings were completed in Saigon and Da Nang under the supervision of the renowned conductor of the United Saigon Orchestra, Son Mach.

A release party for the third album in the series “The Last Thing We Ever Do,” is scheduled to take place at the Turner Hall Ballroom in Milwaukee, Wisconsin on Sunday, August 8, 2021, between 3 pm and 6 pm. Admission to veterans is free and the general public pays $10. Complimentary CDs are issued to all those attending.

Several Milwaukee and Wisconsin-based veterans service organizations will be present at the event to share more information. An exciting lineup is planned, and ten of the 14 acts that wrote and recorded songs for the CD will be present to present the songs.

Since its founding in 2011, Warrior Songs has prevented 34 suicides among veterans suffering from PTSD. It has also provided free services to over 45,000 veterans across the country. This album was a tribute to women survivors of military sexual trauma (MST) from the Army, Navy, Marines, and Air Force and who served the country in Afghanistan, Iraq, Panama, and Vietnam.

Warrior Songs Inc. is based in Scottsdale and its mission is to educate, motivate and inspire war veterans to turn their negative experiences from PTSD and MST into feelings of reclaimed hope and deeper self-awareness.