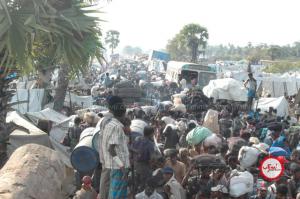 "As the date nears, desperate victim families are struggling to find ways to remember their loved ones"

Sri Lankan authorities were emboldened to continue their atrocity crimes against Tamils, when UN failed to refer Sri Lanka to the International Criminal Court (ICC) as recommended by UN Rights Chief”
— P2P Movement

The memorial is to remember tens of thousands of Tamils who were killed in 2009 by the Sri Lankan security forces in a place called Mullivaikal.

As the Victim families, religious leaders and others were preparing to make arrangements for the twelfth Remembrance Day on May 18th, Sri Lankan Security forces moved in and vandalized the memorial monument. They also stole a memorial stone that had been planned to be unveiled on May 18.

Heavily armed troops cordoned off that area and intimidated the victims and families.

The police also got Magistrate Court to issue an order prohibiting all types of commemorative activities due to concerns related to the rise in COVID-19 cases in Sri Lanka. The court’s prohibition order accords with similar acts in the recent past in which it used COVID-19 as a pretext to deprive the Tamils of their right to memorialization.

As of now the Police have got orders prohibiting Religious leaders, Members of Parliament, University students from commemorations.

This is in stark contrast to a recent Sinhala – Buddhist function that took place nearby. The Security forces and the Police not only attended the ceremonies, but also gave protection. Police did not raise the COVID issue during this ceremony.

As the date nears, desperate victim families are struggling to find ways to remember their loved ones.

It should be noted that Sri Lankan Security Forces were emboldened to continue their atrocity crimes against Tamil people when UN Human Rights Council failed to refer Sri Lanka to the International Criminal Court (ICC) as recommended by UN High-Commissioner for Human Rights, four former High-Commissioners and several other UN experts. P2P Movement also repeatedly urged Referral to ICC out of concern for Tamil's safety and to seek justice.

According to UN internal review report on Sri Lanka, over 70 thousand Tamils were killed in six months in early 2009 and Tamil women were sexually assaulted and raped by the Sri Lankan Security forces.

International Truth and Justice Project (ITJP) in February 2017 handed over details to UN of Sri Lankan Military run "Rape Camps", where Tamil women are being held as “sex slaves”. Also, According to UK Foreign and Commonwealth Office report in April 2013, there are over 90 thousand Tamil war widows in Sri Lanka.

Thousands of Tamils disappeared, including babies and children. The UN Working Group on Enforced Disappearances stated in 2020 that the second highest number of enforced disappearance cases in the world is from Sri Lanka.

According to this UN report, the killings and other abuses that took place amount to war crimes and crimes against humanity. Independent experts believe that there are elements of these abuses that constitute an act of genocide.

Members of the Sri Lankan security forces are almost exclusively from the Sinhalese community and the victims are all from the Tamil community. .