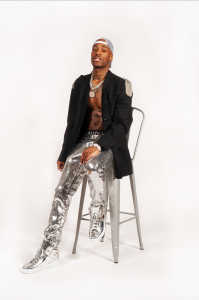 LOS ANGELES, CALIFORNIA, UNITED STATES, May 14, 2021 /EINPresswire.com/ — Rapper YOUNG JIMMY has announced his debut studio album. The new record, titled Rockett 88, will be released on his own record label, HOOD ROCK RECORDS. The name of the 16-track LP came from the hit single by legendary rock n’ roll performer Ike Turner and The Kings of Rhythm.

Rockett 88 is a combination of rap/rock, which Jimmy refers to as “hood rock”. With his new music, YOUNG JIMMY seeks to give representation to the black rocker community. He considers himself a 'hood rocker', which he describes as “a person from the hood who listens to or produces rock music.”

YOUNG JIMMY is an African American with slave ancestors on both sides of his family tree. The Bronx-native recognizes rock music as being derived from African American culture and artists, and on Rockett 88, he seeks to reclaim this often overlooked piece of Black history.

Rockett 88 was recorded and mixed at Quad Studios in Manhattan. It was mastered at Sterling Sound by Chris Gehringer and released under YOUNG JIMMY’s own imprint.

Rockett 88 is available now on all major platforms. Visit YOUNG JIMMY on his website for more information and career updates.

YOUNG JIMMY is a rap artist who grew up in the Bronx, NY area. He pursued his talents of video editing, songwriting, producing music, and graphic design. YOUNG JIMMY attended art and design-specific high schools, eventually ending up at Greenwich House music school. He studied classical music, jazz, rock music, and performed monthly recitals under a scholarship throughout school. YOUNG JIMMY had the opportunity to work with many different bands and rappers throughout the years as both a rapper and guitarist. He represents African American culture, rock-n-roll music, and reclaiming his culture/birthright.