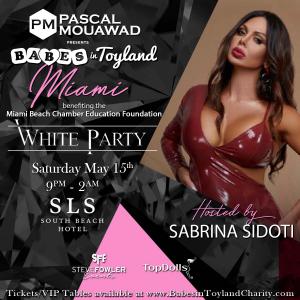 MIAMI, FL, USA, May 14, 2021 /EINPresswire.com/ — Gorgeous Muscle & Fitness cover girl and Miami resident Sabrina Sidoti will be hosting The White Party at SLS at the South Beach Hotel this Saturday, May 15 from 9pm to 2am benefitting Miami Beach Chamber Education Foundation.

Sponsored by Babes in Toyland and presented by Pascal Mouawad this evening should prove to be one of the most sexy and glamorous parties of the season.

“I am so excited to rub elbows with Miami’s best and brightest tomorrow night,” says the beautiful and unbelievably fit Sidoti. “Having a night to remember while giving to a great cause is a wonderful feeling.”

You may purchase tickets to The White Party by going to www.babesintoylandcharity.com

Sabrina Sidoti is the true definition of the fearless, modern American woman. The certified fitness
instructor, competitor, model and entertainer has already lived a lifetime of successes, failures,
triumphs and tragedies, and has come out the other side stronger than ever.

The South Florida native, a willful progeny of Italian parents from New York, grew up near the sunny
beaches of Boca Raton – with notorious gangsters as family friends. “My dad was a real mobster, a
bookie who owned restaurants and race horses… he fled the Feds as a fugitive,” said Sidoti. “My
mom was the loyal Sicilian housewife and my godfather Johnny ‘Sideburns’ Cerrella was the
acting capo of the Lucchese organized crime family.

Sidoti gained notoriety in the ‘90s when she appeared on The Howard Stern Show as Stuttering
Nina the Hot Dog Girl. Playboy Magazine heard her interview and was so impressed that they invited
her for a test shoot. Her big break came when New Rave Magazine featured her in an eye-popping
pictorial layout.

Now that Sidoti is “moving forward and believing in myself,” her personal life and career are flourishing. As a respected fitness expert in the Boca Raton community, she owns SAX Fitness, promoting a healthy, goal-oriented lifestyle, and she recently posed for the cover of Playboy New Zealand’s November 2019 issue
and FHM South Africa January 2020 issue.