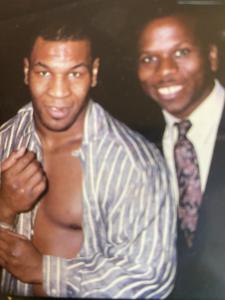 The two part documentary chronicles Tyson's rise, fall and return and Wooley was there for it all

NEW YORK, NY, USA, May 13, 2021 /EINPresswire.com/ — Born and raised in New York City’s Harlem, educated at Delaware's Wilmington University (where he remains an adjunct business professor) Dave Wooley rose to prominence as the only Black man in the country to be awarded exclusive paid-per-view and closed-circuit television broadcasting rights to the Mike Tyson vs Michael Spinks "Once And For All" mega, fight – the largest fight in history at the time grossing over $70 million dollars. For people in the fields of sports, entertainment and event management, they know that only titans operate at that level. This will be one of many facets covered in the upcoming ABC-TV documentary, “Mike Tyson: The Knockout” (airing as a two-part series on Tuesday, May 25th, 2021 and Tuesday, June 1st, 2021 -both nights at 8 pm EST). The documentary will be available on Hulu the day after each broadcast.

"People had not seen anyone like Mike Tyson. He was charismatic, with his talents. He embodied power and that is what is emblematic of what every man thought it meant to be a man. He was captivating," Wooley said. As to why Tyson, along with Michael Jordan and Michael Jackson, became so iconic in the late 80's, Wooley – “Everybody wanted to be like Mike. You just had to decide which Mike you wanted to be! Mike was from the projects in the Brooklyn NY’s Brownsville area (we called it Blacksville) and he had to fight. He did in the ring what he had to do in the streets–dominate! He had to prove that his high-pitched voice didn't mean he could be tested. He was fearless."

Dave Wooley was a concert promoter/producer, who worked with music heavyweights from Stevie Wonder and James Brown to hip-hop pioneers Run-DMC, country legend Loretta Lynn and the great Tony Bennett. Yet, when Wooley wanted to get into the world of boxing event promotion, it wasn't easy. The rights to these events could garner in the tens of millions of dollars and that world was closed to anyone outside of the "Old Boys Club." Young, Black and self-assured, Dave made moves and positioned himself to win. "The process was different by state and sometimes by major city,” Wooley explained. “I wondered if I could buy an entire state, but I was told I had no experience. Concerts and fights were two different things. Concerts happened one at a time but a closed-circuit fight could be at multiple sites at the same time. So I learned how to ‘play the game’, so to speak – I got my letter of credit and soon I had parts of the state of Virginia and later, I had the entire state of Virginia and Delaware." It was that level of access and connection that placed Wooley and Tyson in the same room, for press conferences and special events.

Wooley went on to produce major events and has worked with music legend Dionne Warwick on various projects, including being the co-author of her autobiography. Wooley is the producer and co-director of a new all-star documentary based on the life of Warwick. In the sports world, he conceived and was the sole producer and promoter of the "Clash of The Legends". The historical exclusive pay-per-view event brought NBA Legends, Julius "Dr. J'' Erving and Kareem Abdul-Jabbar together, along with other NBA superstars, together for One on One competitive basketball contests. And in 2020, he was named Talent/Content Advisor for the Biden/Harris Presidential Inaugural Committee.

But Wooley’s greatest creations have been his two amazing daughters–Veda and Davina. Veda is a practicing attorney and Davina received her M.S. in Computer Science from Georgia Tech, one of the nation's most respected schools. He raised them while he was raising the bar in the worlds of sports, entertainment and producing events, and he did so as their single custodial parent.

The Story of David Freeman Wooley is one that must be told to generations to come but that is needed for today's entrepreneur. His 35 years of experience have placed him on camera for "Mike Tyson: The Knockout". That along with his steely and stellar determination is partly why he is so noted and noticeable in the documentary. "It is going to be huge!” exclaims Wooley. “On network television, this is going to reach the world. This is a part of the great American Story and everybody loves a happy ending. Watching Mike succeed and make a comeback like he has shown that we can all get knocked down and if we fight hard enough, we can get back up.”