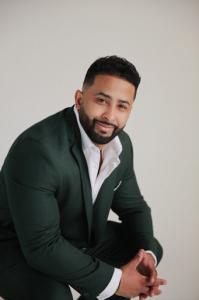 LOS ANGELES, CA, UNITED STATES, May 13, 2021 /EINPresswire.com/ — Ahmed "G Money" Alomari would have been written off as a failure when he was 27 years old. He was working a dead end job at a pizzeria in Newport, Rhode Island, to put money aside for the birth of his first son with his wife, Maya. From the outside looking in, he seemed to have a bleak future.

Who'd have guessed that three years later, he'd be a self-made millionaire with a social media empire and an investment company? At the age of 30, he had made his first million, which he increased to $2.1 million by investing in the stock market. By the age of 31, he had sold his social media business, which included an Alexa top 5,000 website, to former MySpace executives.

He had a net worth of $5.5 million when he was just 31 years old. People find it difficult to comprehend his ostensibly overnight success. People DM him every day, curious about his performance, since he has nearly 3 million followers on social media. They want to know what Ahmed's secret sauce is, so here are four things he concentrated on in his early days.

Ahmed knew there was something better than working as a pizza delivery guy, and the only way to get ahead was to make money work for him.

He didn't squander any time. He took action right away! He would continuously think of side hustles to grow his bankroll while driving in the snow for $3 tips. He came across an article about Scott Delong from ViralNova, who was earning $100,000 a week from viral marketing. At the time, Ahmed didn't even have a Facebook account. Everyone he told about his plan laughed at him and said he'd have to start with millions of dollars. Ahmed became even more excited, and with the $8,000 he had saved, he purchased the domain name RealCoolVideos and went all in.

Ahmed refused to let fear stop him from fulfilling his destiny. He had to take calculated chances and gamble on himself in order to succeed. “Shooters, shoot!” Ahmed exclaims. "You're missing 100% of the shots you don't take! Regret and unrealized opportunity are two of life's toughest occurrences. Make no apologies. Find options instead! People underestimate how money earned through hard work will accumulate over the course of two, five, or ten years. You can change your life in as little as 6 months if you prepare properly, but you must act now.”

Ahmed Focused On Relationships Over Money

Ahmed spent a lot of time networking and building his credibility early on in his Facebook company. He began to form close bonds with DJs and up-and-coming influencers. His fame grew, and he soon found himself on the pages of major celebrities such as Ne-Yo, Eddie Griffin, Brandy, and Meek Mill.

Advertising revenues rose from $5,000 per month to $300,000. Ahmed found his competitors were only interested in themselves, leaving a large gap in the market. Ahmed was praised tenfold for his attention on the relationships first by concentrating on his clients/influencers, understanding what made them tick, and ways they could help.

Before revolutionizing influencer marketing on Facebook, Ahmed had a string of failed business projects. Vending machines, gumball machines, ATMs, and even a smoothie shop were among the places he visited. He tried every money-making scheme you can think of! It took time for me to achieve success. However, he learned from his mistakes and developed ideals and a formula that helped him make millions.

No Guts, No Glory!

Ahmed, like many other wealthy entrepreneurs, lost all of his money three or four times before becoming a multimillionaire. He didn't give a damn about his comfort zone, and he didn't want to fit in. He aspired to live an exceptional life. This necessitated sacrifice. He saved money by cutting prices. He honed his skills and carved out a niche for himself. He thought of all the wasteful things he used to do with his money and decided to invest in himself to get ahead.

Ahmed went on to create three other multimillion-dollar online businesses after selling his Facebook company. He now works as a consultant for some of the world's most prestigious coaches as well as publicly traded firms. His plans, approaches, and practices have been assembled into online training programs that have made his clients millions of dollars. He enjoys spending time with his wife and six children while he is not consulting.