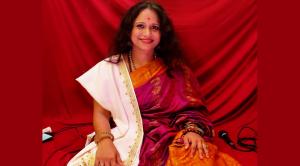 PALO ALTO, CALIFORNIA, USA, May 4, 2021 /EINPresswire.com/ — Shri Vishnu Sahastra Naam, a hymn known to create an aura around its listeners helping them elevate their consciousness, performed by Naad Dhyan Yogini, Sadhana Yogalakshmi, is now available as a non-fungible token (NFT) thus becoming world's first spiritual music on NFT. Produced by Sapio Heritage, a division of government advisory firm Sapio Analytics, under its music label Ajanta HC Music, this piece of music is special due to its exclusivity and perceived impact upon its listeners.

The song is 68 minutes long and invokes the thousand names of Lord Vishnu in the voice of Sadhana Yogalakshmi, who is a yogini known for integrating ancient wisdom, healing music, and spiritual practice to awaken peace and happiness within ourselves, and is a considered a legendary spiritual musician by many.

"The power of ancient Indian culture is best depicted through the music and hymns that have played a role in healing our souls since ages. We selected this hymn to create history of becoming the first spiritual music in the world to be converted into an NFT and thus achieve its true value, because of this hymn's ability to generate introspection and meditation leading to positivity and peaceful environment. In today's world, being able to achieve such level of positivity is important, as it is scientifically proved that a positive state of mind helps fight diseases like COVID better", says Hardik Somani, Director of Sapio Analytics and Member of Government of India Committee on Heritage Restoration using frontier technologies.

NFTs are a way to prove ownership of a digital asset. Using blockchain technology, a unique, permanent, unalterable, unimpeachable and verifiable record is created and assigned. It is particularly useful for content that has a high value due to its origin and provenance. This spiritual music derives its value from the choice of the hymn that is a highly revered recitation and its performer being a rare combination of a yogini and musician. The music label has declared that no other version of this music exists elsewhere in the same manner, making it exclusive enough to be chosen for NFT listing.

"Its inspiring to be selected to be the first spiritual music in the world to be listed as NFT on this platform. I hope this creates remarkable history and a great future for spiritual music, particularly those originating in ancient Indian culture", says Sadhana Yogalakshmi on the creation of history with this listing. Somani adds, "This is a significant start to achieving the true value of such music considering the kind of impact it creates on us. We hope that with this NFT, we are able to initiate a new beginning for ancient Indian art, culture and heritage. Our label produces music that's for the healing of the spirit and raising of human consciousness". With presence in Palo Alto, and in London and Mumbai, Ajanta HC Music label is focused on creating a revolution in the music industry through the unique merger of spiritualism with new age technology.

NFTs are sweeping the world at the present and recently Zoe Roth sold her famous "Disaster Girl" meme's original picture for around 500,000 USD as an NFT. It is yet to be seen if NFTs can alter the world of art and music in ways that their true value is discovered by the patrons.